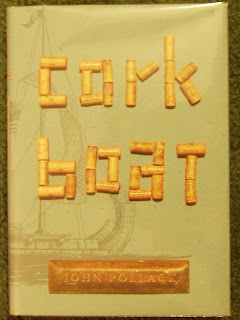 I received this book a while back from a fellow Bookcrosser. It sounded intriguing. A boat built of corks.

I have to admit, that I am unable to throw out the corks that I pull from a wine bottle. They collect in my kitchen drawers. I have never done anything with them, though they do go to school for crafts occasionally.

The author of this book had been saving corks since he was a child. This book related the story of how his cork boat, comprised of more than 163000 corks came to be. It is funny, emotional, serious and factual. I don't think it was one thing that made me love this book, rather the combinations. Perhaps also the fact that while a teenager we had family friends that build boats. My dad was occasionally called to do mechanical work for them. It was interesting to watch the boats being built and later to see them in the ocean.

This book speaks to that bit hidden deep inside that always has wanted to do something way off in left field. John Pollack is one man who did not forget what he wanted and he did anything and everything to accomplish that goal.
Posted by Heather at 20:59

I read Cork Boat earlier this year and I enjoyed reading your review. I too would someday like to do something "off in left field" and it was interesting reading about some one who did.

How fun is that! What a bizarre project.