None of us are getting any younger 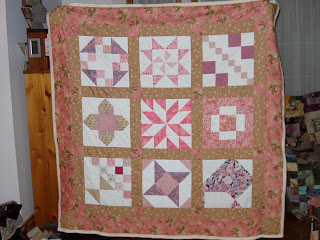 My Grandmother is in hospital having suffered two heart attacks. So I made her a quilt and took it to her. Truth be told, I made the quilt blocks several years back and finally got around to spending a few hours putting them together. I put cozy fleece on the back so it would be cuddly and warm. She was so pleased. She was calling over each nurse as they came into her room and showing it off. I suspect that she will have the best show and tell on the floor for the next few days.

Question for myself is, 'Why did it take me so long?'. As stated, I made these blocks at least 4 years ago, so why didn't I put it together at that time. I knew that both of us are getting older and that she can't live forever. She is 91 after all. Did I really think that by not finishing it, she would live forever? was I trying to deny my own mortality? I don't know the answer, but I do know that I have a few other projects that really should get finished in the near future. 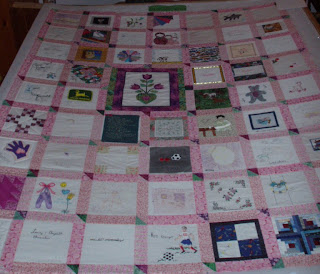 To the left is the first quilt that I made for my grandmother. Its a sampler of all sorts of blocks. Some pieced, appliqued, embroidered, cross-stitched, and coloured with markers and crayons and such. One even survived a house fire and has a tiny burn spot where a spark landed on it and singed the wool. Most of the blocks were made by my sisters and myself. I had intended my cousins to help, but they didn't 'get' the idea of doing a memory quilt for my grandmother.

My grandmother was the hit of the family for months afterwards. The relatives all had to come see her quilt, the church asked her to bring it in to display during a Sunday service (wish I could have been there) and the ladies at her quilt group were thrilled. During our hospital visit, she told me that she has informed her children (my dad included) that this quilt is to come back to me now that she will be moving out of her house and into a long term care facility. Good thing I took her a new one to replace it.
Posted by Heather at 09:43