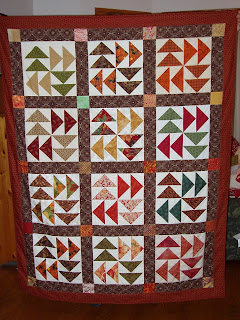 Pictured here is the quilt that I gave to my father in law for Christmas. It is composed of a traditional quilt block called 'Dutchman's Puzzle'. I was fortunate to win them at my local quilt meeting during September.
It did provide me with some learning opportunities. According to the pattern the blocks should have finished at 12 inches. Not a one of them was actually that size. In fact they varied by as much as an inch. Note the block in the top left corner; I had to add strips of muslin to the top and left side of it to bring it up to size. Not a big deal.
The next challenge was that I wanted to back the quilt with a piece of dark, leaf printed polar fleece. This would have shown through the cream coloured fabrics and made the quilt look dark. It would have lost the crispness between the light and autumn coloured prints. The solution was to cut 12 squares of plain muslin at 12 1/2 inches and pin them in place behind each block. This also served to bring each block up to the size stated in the pattern.
Now that each block was the same size, it was straight forward to add the sashing and corner stones. The outer edge is finished with double fold binding in the same colour as the outer boarder. The quilt finished approximately 58 x 73 inches.
Hopefully the quilt is now in my father in laws den where it will keep him warm during the chilly months to come.
Posted by Heather at 14:25