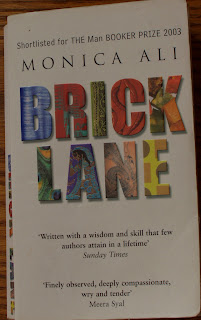 This book found its way to me via a Bookcrossing friend.
Nazneen is the main character in the story. She marries at the age of 18 to a man her parents have chosen and follows him from Bangladesh to England.
Through out the course of her life in London, Nazneen confronts numerous woman's issues. Similar to many of her new friends, she is in an arranged marriage, which are experiencing varying degrees of success. These can be compared with the love matches of her sister Hasina and of the Doctor and his wife. To work outside the home or not. How to raise and educate the children. In this case, Nazneen has the challenge of raising them to respect a country in which they have never lived.
Also to be considered are the Immigrant issues. I see the biggest being whether she has moved to England to become English and remain there or to earn money and move back to Bangladesh at a later time. This becomes a difficult situation for Nazneen as she sees her daughters as being 'English' and realizing that they would not 'fit in' should they return to Bangladesh.
The final issue that I find in the book, is that of friendship. Mrs. Islam offers friendship as long as there is something in it for her. Her husband never liked her friend Razia because she is the 'wrong type of person', but in the end, she is absolutely the right type of friend. I enjoyed the friendship between the husband and the Doctor. Somehow each provided what the other needed. It never is stated, but it seems that each has a success that the other has not been able to find for himself. Seems very true to life to me. Prehaps thats why we chose some of the most unlikely people for friends.
If any of these topics are of interest to you, then take your time and read this book . These are topics that are faced in many situations, not just by new immigrants.
Posted by Heather at 11:41