Which Quilt layout to use???

At the beginning of August I started a new quilt project. I was doing this in conjunction with other members of an online group, Maple Leaf Quilt Guild. Nancy Rose, one of our members, suggested the project and offered to keep us all moving along. You are invited to check her blog for the details. I finished all 64 blocks a few weeks back and have been playing with them to determine their final layout. 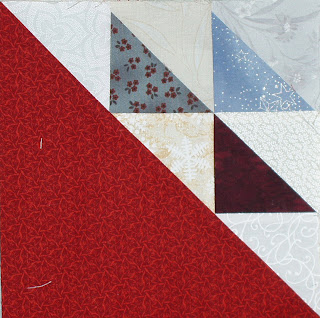 The block is called 'Birds in the Air' and is shown to the left. Note a difficult block to make.

The layout suggested for the project is shown in the next photo. That design is a variation of one called 'Barn Raising'. Barn Raising would have a dark centre as opposed to the light centre shown.

While this is a lovely setting, I thought I would play around and see what happened. Since this block has the same visual impression as a log cabin block, I decided I would take my clues from "the Great American Log Cabin Quilt Book" by Carol Anne Wien.

Over the next few weeks I will continue to post pictures of the many different layouts I have 'auditioned' on my design wall. Let me know which is your favourite. 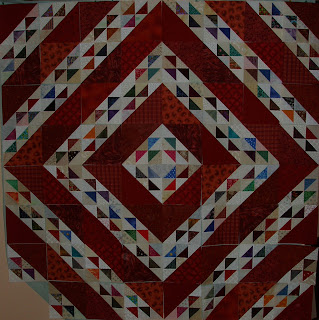