Last of the Breed by Louis L'Amour 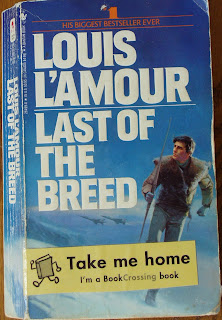 I was given this book by one of my Bookcrossing friends. Its been sitting around for ages waiting to reach the top of my 'To Be Read' stack. Shame on me for waiting so long.
I was expecting a cowboy story, as thats what I thought Mr. L'Amour was known for writing. I couldn't have been more wrong. Actually it is an Indian story.
Joe Mack is a US Air Force Major and he test pilots new airplanes. He is forced down in the ocean off Russia and captured. Now he has to escape before the torture can begin.
The story then follows Mack across Siberia.
This was a well written novel with great character development. For a book first published in 1988, it hasn't lost its intrigue or its ability to captivate. Yes, the Soviet Union has changed much in a political sense, but the sweeping vista of Siberia will yet be dramatic and vast.
As I could hardly put this book down, I will be adding Louis L'Amour to my future reading lists.
Posted by Heather at 16:32