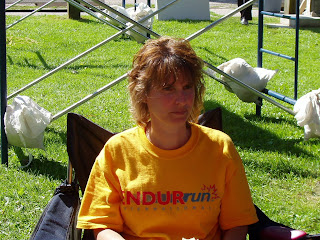 I thought we were going to make it yesterday. I know the clouds looked ominous and the thunder was peeling off in the distance. I really was trying to convince myself that it would blow away.

It wasn't to be. The skies opened and started to dump on use as the runners approached out water station at the 3.5km mark. OK, it wasn't heavy or anything, the runners were managing so of course we continue.

Being that this is an out and back route, we were also the water station at the 14km point. For this return trip our weather luck had totally failed. 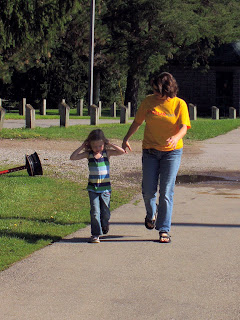 By the time my final runner was approaching, I was the only volunteer standing at the road side, a cup of water in one hand and and a cup of Gatorade in the other. I was yelling all the encouragement I could. My runner was still upbeat and I knew he was going to power his way up those final hills to the finish. Once he was past it was back to my car to return to the start/finish area. I couldn't believe it when it started to rain harder. What could I do? I had my daughter lower her window so she could call out further encouragement to the 2 runners we passed on the way in.

When I reached the finish there were at least a dozen volunteers and race officials standing in the pouring rain awaiting the remaining runners. Wow! Somehow the 'food' volunteers managed to put on a wonderful (and mostly dry) dinner. Sorry I have no pictures, but you'll understand about wet and cameras.

The two pics shown are from stage 2. The first is Julie, she is co-ordinating all the food for the event, as well as being my friend she is also wife of the race Director. Next is the wife and daughter of one of the runners running along the final 200 metres of that stage.
Posted by Heather at 11:58

Email ThisBlogThis!Share to TwitterShare to FacebookShare to Pinterest
Labels: Endurrun