Offspring: A Novel of the Silent Empire by Steven Harper 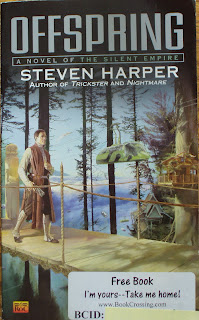 Today my entry is not so much about the book I read, but rather about the timing. I find it an amusing story, whether you do???
As you may be aware, a week ago a federal election was called in Canada. By chance that is the day I started to read this book. The author of the novel is Steven Harper, and our current Prime Minister is named Stephen Harper. Now the part that amuses me. The day I finished reading the first book in this series was the day that Stephen Harper was first elected.
There is no connection between the two men that I am aware of. In fact, Steven Harper is really Steven Piziks.
I did enjoy this book and found my self looking forward to "whats going to happen to Kendi and his partner next". I was fairly easy to suspend any disbelief that people could communicate telepathically over great distances.
Posted by Heather at 16:52