The Black Tower by Louis Bayard 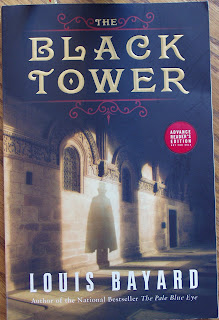 "Never let your name be found in a dead mans trousers." Hector Carpentier
This novel is set in Paris in the year 1818, while King Louis XVIII sits on the throne. Our main character, Dr. Hector Carpentier has been linked to the untimely death of Chretien Leblanc. From this point on Hector is compelled to work with Police investigator Vidocq to determine why Chretien was travelling to see him, a man he had never net.
We are quickly drawn into a web of political intrigue that dates to 1794 and the imprisonment of Louis-Charles, son of Louis XVII and Marie Antoinette.
It is fascinating to follow along as Vidocq pursues his investigation without the benefit of modern forensics and CSI techniques. Careful observation is paramount.
I enjoyed the growth of Dr. Carpentier from a self absorbed student/researcher, into a confident, responsible member of society. This was clearly illustrated when Hector was still trying to protect Charles Rapskeller as they were awaiting their fate at the guillotine.
I admit that at this point I slammed my book closed and thew it across the room as I cried 'no'. It was the next day before I could continue reading. While I will often cry along with a character, this was the strongest emotional response that actually sent me 'fleeing' from the room. A totally compelling read. The intrigue kept me guessing till the final pages. I look forward to reading more by Louis Bayard. This is his third historical novel.
The character of Vidocq is based on the real life Eugene Francois Vidocq who was appointed the first chief of the Surete in 1811.
Posted by Heather at 12:55