To Serve and Submit by Susan Wright 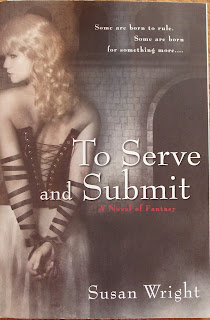 This novel is set in a mythical world that seems to bear some resemblance to Newfoundland and Labrador.
Marja is a young woman living with her family who survive on what they can coax from the land. When a traveller arrives at their home offering to buy Marja, it seems a salvation to them.
She willing leaves with Lexander a year later when he returns with the promised payment. From this point forward, Marja's life changes in ways she had never imagined. In his travels, Lexander buys men and women and then trains them in the ways of being a slave in a "pleasure house" in his homeland.
Marja quickly learns that her true nature is that of a 'submissive'. Through the remainder of the book the reader, as well as Marja, learn that being a submissive does not mean that you become a 'doormat' and get trodden over in all aspects of your life. With the guidance of other women, Marja learns to take control of her life and her destiny. She learns that she can be a submissive in the sensual areas of her life yet still main control and responsibility in the other areas.
I'll admit that I had no idea what this book was about when I picked it up. The sub-title 'A Novel of Fantasy' caught my attention. After a tough week, a bit of fantasy can't hurt.
I liked this book. It showed that women can be both soft and yielding/nurturing but have spines of iron and wills to match.
Susan Wright is a well established writer with over 25 titles to her credit including 11 Star Trek novels. She is also the Spokesperson for the National Coalition for Sexual Freedom in the USA.
Posted by Heather at 19:29