All My Relations: An Anthology of Contemporary Canadian Native Fiction edited by Thomas King 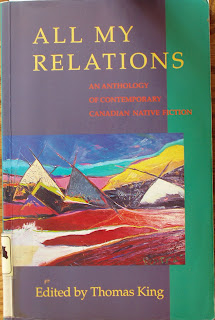 This book is a collection of short stories by a number of different Canadian First Nations Authors. I have included a few comments about each story. These are my own thoughts and feelings, your will probably be quite different. Where possible I have included links to each author.

This is the story of George Jim who is convicted of killing a white man. While in jail he is taken to England and paraded around as a show piece to earn money for his captors.

The story appears to have been transcribed word for word as Mr. Robinson told it to Ms. Wickwire. It reminds me of sitting with my grandparents and listening to their stories.

I love stories such as this. It's a day in the life of our main character. She awakens early and has time alone with her mother, which I suspect is a rarity in such a full house. It turns out to be a special day with a visit from the Medicine Man.

See my review of 'Little Voice' also by Ruby Slipperjack


It's the story of Peter and how his life and family have changed since his father passed away. Peter had found solace in his running.


This is one of the best descriptions of the meaning of running to the runner that I have read. Peter is usually calmed by his running, but today that is not the case. Its as though the running is sending him a message that this is wrong.


A fable. Coyote's survival is threatened because he is mesmerized by the web the Weaver Spider is making. He is saved when Grey Fox comes to visit and sees what is happening.


It's amazing how people can get stuck on the smallest of details yet miss out on all the major events that are surrounding them. I think that this would make a wonderful children's picture book. I can imagine the lovely pictures that Weaver spider would be spinning.

Hilda is visiting from Germany and wants to learn about Indians. She spends the day with Lucy and her kids and learns that their daily life is just like anyone else. You have to care for your family, cook and clean. It seems she is looking for some profound revelation but finds that we are all people regardless of race or colour.

This is a coming of age for the second time. Jerry has returned to university to earn his Masters. While camping with his young girl friend and one of her contemporaries he realizes that their life is no longer for him

Several ladies from Wasaychigan Hill on Manitoulin Island want to go to Toronto for the bingo where there is a larger pot to be won.

Reminds me of my grandmother telling me of the ladies at the bingos that she used to attend. Am really looking forward to seeing this play performed.

An Afternoon in Bright Sunlight by Shirley Bruised Head - Blackfoot

This story has the start of an amazing novel. An interesting mix of characters, a remote wilderness location, and a mystery. Is it an old woman, a bear or a malevolent spirit that lingers in the coulee? Just when I thought we'd get a hint, the story ends.

The One about Coyote Going West by Thomas King - Cherokee

Grandfather tells the story of how coyote discovered the Indians. A modern legend.

See my review of 'Medicine River' by Thomas King

A sad tale. SueLinn is 9 when her mother dies. Kindly senior James William takes her in, with the understanding that the little he has to offer her is much, much more than the child welfare agency could ever hope to give her. Wonderful writing. Beth easily conveys the anguish that Sweet William feels while making his decision to care for SueLinn.

This is an excerpt from an untitled novel. Hookto seems to embody all that is dark and evil. The only thing that can defeat him is pure good.

This is a Story by Jeanette C. Armstrong - Okanagan

This is the story of the People and how the Swallow people caused the salmon to leave the river. The People stopped living the way they needed to and began living the life of the Swallows. This was not good for them.

All peoples must live their own life and not anyone else's life.

This is a story for reflecting. For thinking back to the past. The dancers are in the plaza dancing down the rain as they have for decades past. I can almost hear the beat of the drums and the thumping of the feet on the previously dusty ground.

Welcome to the Real World by Joan Crate - Cree

Dione is a new mother and while visiting with her mother she reminisces of when her family got electricity in the house and avocado coloured appliances.

After a morning in bible classes, Jim, Bill and Hartman go out with shotguns to eliminate a murder of crows that are too bloated on berries to fly away.

Wustenaxsun found her in the city, living the life of the cement people. He brought her to the country to "live". Now that he has passed on she needs to find the strength of self to continue with her real life and not to resume the cement life.

King of the Raft by Daniel David Moses - Delaware

A coming of age story. The boys spend the summer hanging out on a raft anchored in the river. Much time is spent telling stories and comparing life events.

Song One: The Riverside by Jovette Marchessault - Montagneise-Cree

A young girl grows up living half the year in her mother's house and the other half in her grandmother's. Her growth and learning is greatly influenced by her grandmother's beliefs and traditions.

35 Boys from the residential school spend the summer camping on Aird Island.

See my review of The Manitous: The Spiritual World of the Ojibway by Basil Johnston
Posted by Heather at 13:38

I'm familiar with some of these authors from Native Poetry in Canada, an anthology I read earlier this year editted by Jeanette Armstrong and Lally Grauer.