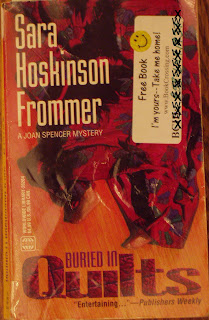 First off, I have to admit to a weakness for quilting novels, meaning I've read a fair number of them and have more on Mount To Be Read. This ranks as one of the better ones. Ms. Hoskinson Frommer has managed to incorporate quilts and quilting throughout the novel, not just limiting it to a cover photo and a passing mention like some I have read.
Her main character, Joan Spencer, is the manager of the Oliver, Indiana Civic Symphony which is scheduled to perform at the local quilt show. During the dress rehearsal, a body is found under a quilt. Somehow Joan is drawn into the investigation just like she was in the previous book in this series.
I found that the characters in this book are very realistic. They may have been in the same orchestra, or working on the quilt show together, but that didn't automatically make them best buddies or even friends. Lots of possible suspects and motives.
Quilters will enjoy the accuracy with regard to the quilts and the running of the quilt show, though I do question the high values assigned to some of the items (might be the difference between Canadian and American valuations).
I didn't guess the outcome until it was revealed. I did enjoy the development of the renewed relationship between Joan and her daughter Rebecca (also a quilter).
The series continues with a few more books , though none are of a quilting nature.
I will be passing this along to another member of my quilting 'bee'.
Posted by Heather at 17:19