The Man Who Ran Faster than Everyone: The Story of Tom Longboat by Jack Batten 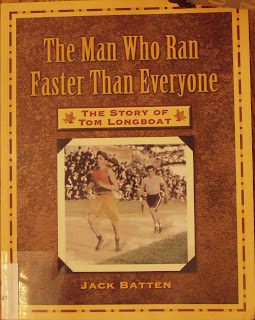 Being a runner, I had heard of Tom Longboat and of him winning the Boston Marathon, but I didn't really know anything else about him. Fortunately Jack Batten has changed all that.

Tom, an Onondoga Indian, was raised on the Six Nations Reserve near Brantford, Ontario (1/2 hour from where I live). He started out as a lacrosse player, but at the age of 17 he was challenged to a race by a teammate, which he easily won. Shortly after that he began to take his running more seriously.

Jack tells us that for Tom, running brought him pleasure. Like many runners I know, he liked the way that running emptied his mind of worries.

In 1906 he entered his first major race, the Around the Bay race in Hamilton, Ontario, a distance of 19 miles 168 yards. He won over the favoured runners by almost 3 minutes. This race is still run in March with a distance of 30 km.

His next major race which brought him world wide recognition was the Boston Marathon , April 19, 1907. He won this by an unprecedented 3/4 of a mile lead.

The book goes on to detail many of Tom's races and his competitors. What I am most impressed by, is for Tom to have been winning so many races against such esteemed competitors he must have had a comprehensive training program which no one seems to have known about. Here was a young man, without the advantage of wealth to pay for his training, nor the modern shoe technologies and food supplements, yet he was running times that would please many a runner today. Wow.

Mr. Batten has written an easy to read book that clearly conveys the thrill of the race. He brought this runner to life for me. Tom Longboat has also been remembered by the establishment of the Longboat Runners of Toronto, Ontario, who host a race in his honour each September.

This book will count toward my total for the 2nd Canadian Book Challenge. It isn't written by a First Nations Author, but it is about a First Nations and a Canadian Hero.
Posted by Heather at 20:37

Just to say thanks again for ever reading my blog.

I won't be blogging anymore.
I just have too much happening, and no time to waste on it haha.

And the best wishes to you for the future.