The Beet Queen by Louise Erdrich 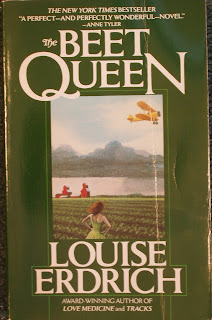 In 1932 11 year old Mary, 14 year old Karl and their month old brother are abandoned by their mother. After a stranger takes the baby, they hop a freight train in search of their Aunt Fritzie in Argus, North Dakota.
While Mary makes herself part of the family, in a panic Karl gets back on the train and his life doesn't intersect with Mary's again for many years.
I love the story telling style of this book, Ms. Erdrich takes the everyday happenings of Mary, her cousin Sita, her best friend Celestine and of Karl, and turns them into riveting events. I just wanted to keep reading and reading to find out what would happen with each of them next.
Each chapter has its own narrator and we often learn of an event from more than one perspective. I have read a few books written in this style, but this is by far the most effective.
Lousie Erdrich is a prolific author of poetry, children's books, fiction as well as non-fiction. Her most recent novel "A Plague of Doves" was released in April 2008.
When I told a friend of mine that I was reading novels by First Nations Authors, she sped out of the room and returned moments later with this book for me to borrow. Thanks Pauline.
Posted by Heather at 21:25