A Maggot by John Fowles 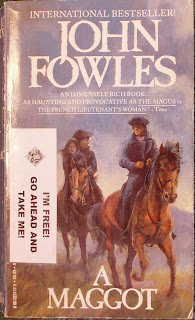 We meet these characters over the period of one day, 50 pages. Then we skip forward 6 weeks to when Dick's hanged body is found. At this point a lawyer, Mr. Ayscough, takes up the trail of the four missing travellers. While the story has not quite captured my imaginatiion I am curious of how Mr. Fowles is going to spend 400 pages with the lawyer questioning the witnesses. I continue to read.

Recalling books that I've read that were actually written in this period, this novel is true to form. As much as there is story telling, there is a fair bit of political and social commentary. When these passages continued for longer than a paragraph my eyes would glaze over, they would mechanically trace the lines and I would blankly turn pages having no idea what I had read.

While I won't recommend this book to most readers, I can imagine it done up as a very compelling movie with rather dramatic courtroom scenes.

If 18th century British novels are your thing, then you will enjoy this book. Mr. Fowles wrote several other novels before he passed away in 2005.