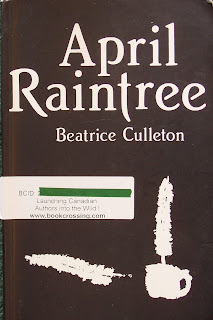 I was relieved to find that this is a fictional account of the lives of two Metis sisters growing up in Winnipeg, Manitoba. April and her sister Cheryl have been removed from their parents' home and placed with a series of foster families. By chance, April has a lighter complexion and identifies herself with the white population while Cheryl has a darker complexion and identifies herself with the Metis population.

I was captivated by both girls. I would have welcomed either of them into my family.
-

I don't fault April for choosing to play on her light colouring, after all, her heritage is part white. I don't walk around with a banner exclaiming all parts of my ethnic make up, so I didn't expect her to do the same. I found it mostly positive the way Cheryl embraced the Metis and how she did her research about them and presented her findings in her various school reports. Without having her parents to provide a sense of identity, she went and found it for herself.
Without unveiling a plot development, I was sad with what happened to April when she returned to Winnipeg to help her sister. It seemed too much to play up to stereotypes, but I suppose that it's also a reality. That in the end it had nothing to do with being Indian, but rather with choices that Cheryl made me accept better that it had to happen for the story to progress as it had.
-
I cried lots of tears as the story turned back to Cheryl. She had so much hope and she seemed at first to do all the right things. I really wanted her to succeed and do good work at the Friendship Centre and for the Metis people.

I am glad to find that this book has 're-written from the original "In Search of April Raintree" for use in high schools', otherwise I would have kept searching for a copy of the other thinking that it was a sequel or prequel to this one. . It is currently the chosen books for the On the Same Page: Manitoba Reads project. The aim of which is to have 12 000 people read this book prior to April 2009. If you live in Winnipeg and have read the book this year, go to this link and register your read. update: October 24, 2009 - voting is over, though the link takes you to the City of Winnipeg Library website.

Thanks to Beatrice Culleton for creating a book that has provided such a good opportunity for reflection.
-
Thanks to my online friend author Kathleen Molloy for sending me this book as a surprise to help me along with my quest to read 13 books by First Nations Authors as part of the 2nd Canadian Book Challenge.
Posted by Heather at 12:50

What an interesting review.
I don´t quite know what it has been like being an Indian in Canada, but as I am a teacher, I have come across many novels and stories about minorities in the USA. I often choose subjects like "black in a white America" for my students, and this week we studied President Obama´s inauguration which was very interesting.

Its good to hear that you are exposing your students to all sorts of experiences. It definitely helps them to see how different the world can be (or how people around the world can be similar in their wants and desires).

I'm curious about your comment that this book was rewritten from the original In Search of April Raintree (which I own and have read). What does that mean?

Great idea to read 13 books by First Nations authors for the Canadian Book Challenge, by the way!

I found your blog thanks to your comment on the Book Blogs ning, by the way!

I read this book many years ago in high school. I am not native however grew up in Saskatoon, Sk. I was a young single mom at 15 and went to a high school which changed my perspective on life.

I chose to take Native Studies rather than the regular Social Studies and am to this day beyond thankful I did.

Like I said I am not Native nor Métis, but rather I am Vietnamese. This story hit home for me in many ways and even as an adult, there are some days I think about this story and am reminded of how different I am. I still have yet to feel at home or able to be myself. Actually I wouldn't know who " myself " is. I feel the pain Cheryl carried and I also understand hiding who I am or where I came from like April. It is not easy growing up alone in foster care, left under the state of the government and learning to only trust the survival mode you are accustomed to because lets be honest who could take a social worker to school events as a parent?

You grow up not only being able to have dreams, but not being allowed to because you are too busy to prove you are worth it.

This story needs to be read by all people and maybe, that is if most still care, maybe there not only will be true change for the good for métis people but most of all the child welfare system full of social workers and bless their hearts had great intentions but learned real quick the system has not changed one bit and actually causes more pain and more damage.

I say this because I can see how no matter what I am still a statistic and no matter how hard i tried and have a normal life and raise my children, that cycle still managed to seep into my life as an adult and now I weep watching the system fail my sons as it failed me.

A hope more people read this story, and understand a little of the suffering some people carry in their souls because for some, this is real. This is life.