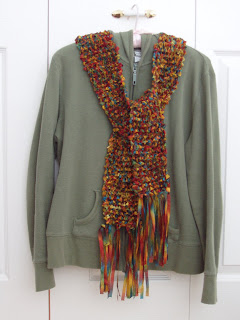 Two weeks ago while chatting with a friend, we were lamenting out unfinished projects. We agreed to finish a project each by the end of January. The scarf shown to the left was started ages ago but I didn't enjoy knitting with ribbon so it sat and sat. It used 2 balls of Lion Brand Yarn 'Incredible' a nylon ribbon yarn. It was knit on 9mm needles. While knitting I had to be real careful to wrap the yarn around the needle without twisting it. A real pain. I won't be knitting with ribbon again for a long, long time.
The second pic shows the blocks that were submitted for a Block of the Month program that I run with a Canadian online Quilt Guild. The theme this month of was white and yellow. The winner will be chosen by lottery and the blocks mailed off to her later this week.

There were 4 votes on the poll and a few comments and personal emails. All were in favour of continued updates on the quilt progress. 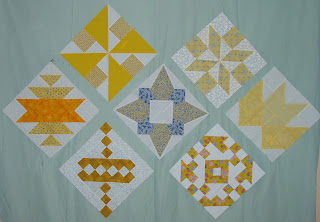 Most of the last week was spent quilting the outside boarder that is shown on the extreme right of the picture. Once that was done I was able to roll the quilt (the quilt is mounted on a 1x2 wood frame, once a strip wider than 3 inches is quilted, the corner clamps can be released and the quilt is literally rolled around the wood) and start working into the body. Almost finished the star in the lower portion as well as the twisted rope motif that runs inside the boarder. I was playing around with the lighting so you could better see where I have actually quilted. 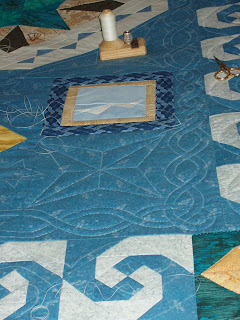