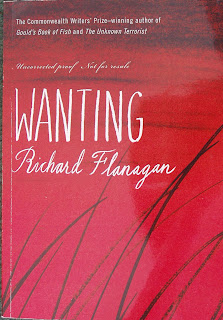 There are several stories in this novel that have been laced together by the common theme of wanting.

Sir John Franklin is long missing on his fateful voyage to the Arctic in search of the Northwest passage. Charles Dickens is at a cross roads in his marriage. The Aboriginal population of Van Diemen's land (Tasmania) are being hunted to extinction and the remnant population has been isolated on Flinder's Island, while Franklin was the Governor.

Lady Jane Franklin wants Charles Dickens to squash the rumors of cannibalism that are being linked with her husband and his ship mates. She also wants a child, a daughter, and adopts an Aboriginal one when she is resident in Van Diemen's Land. The child, Mathinna, wants to contact her ancestors, mostly her father. She wants to live when so many of her people have died. Charles Dickens wants to know what is wrong in his marriage, wants his play "The Frozen Deep" to be a success and he wants Ellen Ternan, a young actress that is performing in the play.

What do I want? I want this book to be about Australia and its original population. In a large way it is. We clearly see the attitude toward the Aboriginal populations in the early and mid 19th century. They are viewed more as animals to be hunted and controlled rather than as a people with thousands of years of a rich history. Lady Jane is unsuccessful in her adoption of Mathinna mainly because she seems to have no idea how to mother a child. If she had hugged Mathinna as her first impulse suggested, the rest might have turned out much differently.

I have read a few books recently about the Indian Residential Schools in Canada and couldn't help but see the similarities. Children removed from their cultures and raised and educated by cold, impersonal strangers. Then they are thrust back into a society where they no longer fit neither as a white person nor as a native person.

At first I didn't understand why Charles Dickens was such a major character in the book. As I kept reading I understood that without his eloquent written support, the reputation of Sir Franklin would have been badly tarnished and that would have destroyed Lady Jane.

This is a wonderfully written book. I could easily imagine the desperation of Mathinna when her adopted life is taken from her. I could also see myself kicking my shoes off and curling my toes into the soil and getting the 'feel' of the land inside me. I would have like to learn more about Lady Jane and her interactions with Mathinna, but perhaps the act of adopting her and parading her to society was as deep as the relationship ever got.

As I was reviewing what I had written and thought about 'wanting' these lyrics by the Rolling Stones came to mind: "You can't always get what you want, but if you try sometimes you might find you get what you need"

I wonder if Mathinna finally got the contact with her father that she wanted?

An Introduction to Charles Dicken's "The Lost Voyagers"

A Site dedicated to the memory of Mathinna