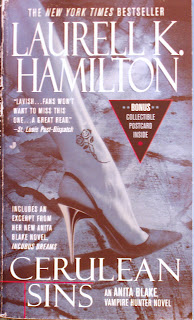 Sorry I have been silent all week. My kids were off school for their March Break and my daughter usurped the total use of my computer. She has found an innovative way to occupy her time. She writes stories with her friends. She has added a 21 century twist. She starts the story and then emails it to a friend. The friend then replies with her addition to the story. and this continues...until the story reaches it obvious end. She had been doing this with a few of her friends.. Since they use the 'reply' the whole text of the story is contained in the final email. I am curious if others are co-writing stories in this manner?
-
Even though I haven't been at the computer I have been reading and thinking about some reviews. This one has been sitting longest.
I caught this at a Bookcrossing meeting. Vampires and such, sounded kinda interesting. Oh it was so confusing. So many characters all being introduced at once and not only vampires and Anita (our main character) who is a vampire executioner as well as a official 'animator' of dead people, and then there are all the were- peoples. I figured this was rather complex for the second novel in the series, but I would keep reading and perhaps it would become clearer.
-
It did get better and I found myself enjoying the story. Anita is a very busy and complicated (oh I hate that expression) woman. Rather I should say she has a lot of male involvement. Hmm, that doesn't sound right either. Somewhere around the 3/4 point in the book I visited the website 'Stop, You're Killing Me' and found out I was very misguided. This book is actually 11th in the series. That explains my confusion. I went to my library and signed out the first in the series, "Guilty Pleasures" from 1993.
-
All the above being considered, I want to read more about Anita Blake who is a Federal Marshall with a badge allowing her to hunt and kill vampires, the bad ones that is. Laurell Hamilton is a prolific author with 2 book series and a comic series with Marvel based on the Anita Blake character.
Posted by Heather at 14:26