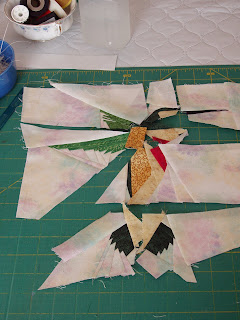 I did get busy in the sewing department in the last few days. I finished the Hummingbird block for Julie Ann's mom's quilt. At a comment from Dorte I thought I should show you how a paper piecing block goes together.

The first photo shows all the pieces have their fabrics and are loosely arranged in their finished positions. The seam allowances have not been trimmed. 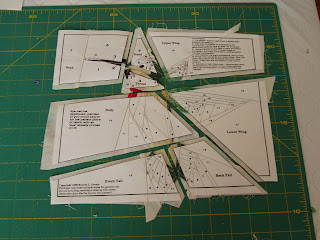 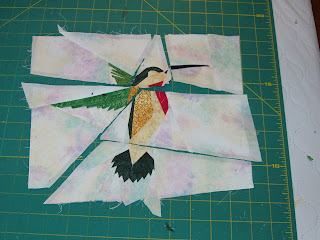 the inner seam allowances to 1/4 inch. You can see the paper pattern. The drawn lines are the ones you actually sew along. 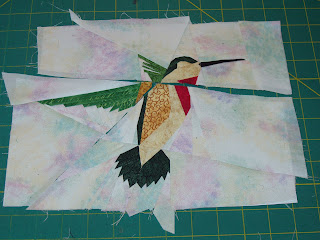 Fifth photo shows the finished block. I still need to add the eye. Somewhere in the kit there is a piece of ultra suede to use. Supposed to be real easy to applique as there is no need to turn under the edge. 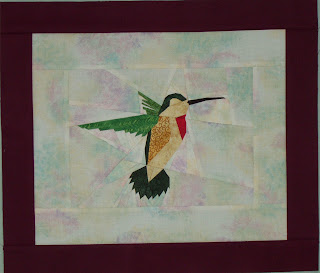 In a few places the sewing thread showed through, so I took a Sharpie marker same colour as the fabric colour and coloured the thread. Now they no longer show. 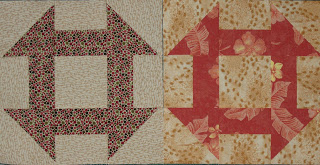 Last evening was the monthly meeting of my local quilt guild, 'The Elmira Needlesisters'. We have been doing a monthly Block of the Month series based on the book "Hidden in Plain View"
which tells the story of messages hidden in quilts that were to help the slaves escape from the plantations in the United States. There is controversy of whether this is true or just the imaginings of one old woman. I don't suppose we shall ever know the truth since those who could tell are long dead. 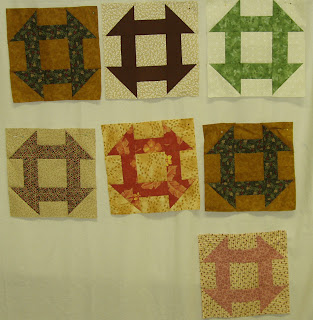 I made up two of the Monkey Wrench blocks and took them in. I was fortunate to win the seven blocks that were submitted. Now I need to make a few more for enough for a lovely lap quilt.

Last Tuesday I showed a picture of the flower pot block that I hand pieced. The ladies at the guild were busy and brought in their finished blocks. I pinned the 9 of them on a green sheet. More will be completed for next meeting so I will take another picture at that time.

Unfortunately I didn't get any hand quilting last week, so no updates on my cousin's quilt. I have much better intentions and aspirations for this week.
Posted by Heather at 11:31

Beautiful work, Heather. I love your Sharpie tip! You are an inspiration to me. I hope to start quilting again(at least, finish a few small items or learn a new technique) when we get settled in the new house. My stuff was never this nice, though. Good job.

Hi Marie,
The most important part of my quilting is that I am having fun with what I am doing. The rest is a bonus. My work has improved with practice and believe me, I do get a lot of practice. I like to make blocks to donate for charity projects. Great time to try a new block or practice a technique.

Wow, that first one looked like chaos and turned into a gorgeous bird! I am amazed - and impressed :D

Heather, your humming bird is beautiful! What a great job. Thanks for the tip about coloring the thread with a marker.