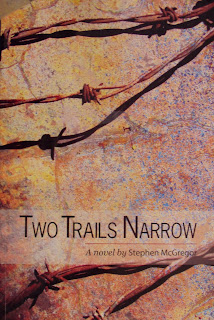 This is one of those stories that right at the start kicks you in the gut to ensure it has your attention. Once you're at that point the story is enough to keep you on the edge of your seat.
-
It starts with Ryman McGregor and 'Abraham Scott planning to escape the terrors of their residential school. The two boys, along with Dorothy, Ryman's sister, escape with the help of Joe, who is returning home from work travels. Through Joe they meet a number of people who are willing to assist the children.
While Abraham and Ryman have only known each other a short time, they have helped save each other's lives and have forged a life long bond.
-
I was not surprised when separately they both enlisted to serve in World War II. Their education by the priests had not succeeded to turning them into farmers and they no longer fit into their traditional Algonquin communities. As soldiers their worth would be determined by the job they did and by their survival.
-
I have to admit that I cried through much of the balance of the book. At time it was the description of the events and at others it was my knowledge that the events described were only a pale comparison of the realities of that War.
-
My grandfather was in Holland for part of his tour of duty. He only ever spoke of the wonderful and thankful people he met. The ones who would run out to the street to shout warm greeting when the soldiers marched by, or of playing lots of card games with his fellow soldiers. He never spoke one word of the other 'things' he had to do. In some ways this book speaks to me the words my grandfather could never voice.
-
This story may have started in the Residential school, but it did not stay there. Dorothy, Ryman and Abraham all grew beyond their experiences there. They all became successes at their chosen lives/careers. The message I got from this is that yes, the Residential schools were bad and they did serious damage to the children who were sent there, however that is not the definition of those children's lives, they have had many more experiences since then and their lives are defined by all of those experiences and have been influenced by a wide range of peoples.
-
This book is published by Theytus Books, the first First Nations owned and operated Indigenous publishing house in Canada.
-
Review in the Globe and Mail (who didn't seems to like the book)
My 11 book for the 2nd Canadian Book Challenge
Posted by Heather at 10:46