Darkness at the Stroke of Noon by Dennis Richard Murphy 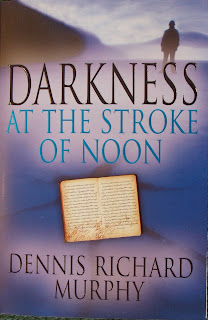 Captivating novel set in the Canadian north during a few days of an arctic summer.

RCMP (Royal Canadian Mounted Police) Sergeant Booker Kennison has recently been posted to Yellowknife, Northwest Territories. Whether it is punishment for uncovering shady dealing within the RCMP or to protect him from criminal elements from his previous post in Ottawa, we don't know. He is soon sent to investigate the deaths of two researchers at Victory Point, King William Island, Nunavut.

From the moment Kennison steps foot on Victory Point the drama intensifies till the climax in the final pages.

We quickly find out that an unknown diary from the Franklin Expedition of 1845 has surfaced and that it might contain evidence of the truth of what happened to the crews of the Terror and Erebus and whether they actually traversed the North West Passage. Also seeking this diary is Ruby Cruz from the Arctic Exploration Institute in Mount Winans, Maryland.

To further complicate matters, a violent group known as Turqavik have travelled to Victory Point to seize the diary at any cost.

Within pages of meeting Kennison I knew that he was a character that I wanted to see more of. Unfortunately this will be his only story, the author, Dennis Richard Murphy passed away shortly after he finished writing this novel. Mr. Murphy easily conveyed the difficulties of working in a northern climate and had me pulling another quilt over myself to ward off any shivers. I could imagine pulling on layers of clothing and creeping outside into the wind to go to the rescue of the missing scientist (you'll have to read the book to find out which one).

This book was a terrific follow-up to my recent read of "Wanting" by Richard Flanagan. We learn about the Franklin Expedition via the diary written by William George Bearman of Kent, England. Evidence does support that the crew suffered from scurvy, lethal levels of lead poisoning and that there was clear evidence of much cannibalism. While I could not find a list of the crews of either ship, I did enjoy the mix of fact and fiction.

This book should have a wide appeal to people who read history, politics, love adventure, police stories and even a bit of romance was thrown in. I could imagine that had there been a further novel, there would have been 'something' between Kennison and Ruby Cruz.

With the current thoughts on global warming, its possible that more evidence of the Franklin Expedition will be found and that the use of the NWP could become a more regular event.