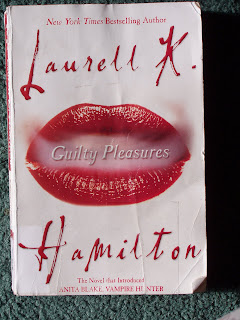 Along with being a Vampire Hunter, Anita is also an Animator of the Dead (she makes Zombies) and a consultant of the Regional Preternatural Investigation Team, R-P-I-T, a special police service.

Someone is hunting and killing vampires. While she agrees to work with the police she is tricked into investigating on behalf of Nikolaos, Master vampire of the City. Anita doesn't like vampires, not at all and she likes Nickolaos even less.

I really liked the character of Anita. Other than a most unusual job, she comes across as a person with the same job concerns and friend challenges as the rest of us. The image of her sleeping with a stuffed penguin after a rough day is very endearing.

Each author takes licence with the 'rules' concerning vampires. Laurell has '4 marks' of the making of human into a vampire servant. Jean-Claude has applied two of these to Anita (to save her life?). It will be interesting to read how their relationship develops in future novels.

I enjoyed "Guilty Pleasures" much more than I did "Cerulean Sins" which I reviewed recently. Lesson learned, start at the beginning of a series, don't jump in at Book 11.
Posted by Heather at 20:05