the ORIGIN of SPECIES by Nino Ricci 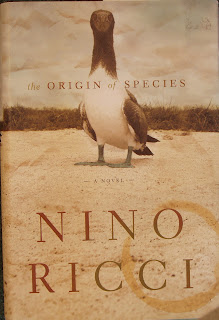 I was set to like this book, in fact I expected to really like this book. I thought I had good reasons to love it. Previously I had read "Lives of the Saints" Mr. Ricci's debut novel and loved it. The cover picture of 'Origins' still speaks to me, the colours(the clouds at the top of the cover should be more blue), the image of the blue footed booby grabbed me the instant I saw it, even the fake coffee rings on the front and back covers. The clincher was knowing that Alex, the main character, would travel to the Galapagos islands, to me a mysterious and enchanting location. Whats not to love?

Unfortunately it didn't come together for me. I followed Alex Fratarcangeli as he worked to complete the requirements for his PhD in Interdisciplinary studies (linking literary theory with evolutionary biology) at Concordia University in Montreal, Quebec. It is the day after the disaster at Chernobyl and Alex meets his neighbour Ester. She is also a student at Concordia as well as living with Multiple Sclerosis. There is an attraction between these two right from the start. Its not sexual, possibly maternal, Alex doesn't give a thought but immediately comes to her rescue that first day.
I was talking with my sister about this book. She hasn't read it, but has read several others by Mr. Ricci. We were talking about the 'evolutionary aspects of this literary work' kind of like the thesis that Alex is writing. From an evolutionary aspect, a species seeks to reproduce so that their genes continue. Perhaps its in his subconscious, but that's what Alex is seeking to do. Felix offers him the possibility of a relationship, but Alex chooses not to follow-up on that. No chance of reproducing.
Alex is involved with a number of females in the story. First there is Liz, they do manage to reproduce, but there is no live offspring, so Liz is out as a mate. Then he does get together with Amanda, but turns out to be not suitable as a long term mate. He meets Ester and she gets along well with Alex, and there is a mutual attraction. Unfortunately she has a terminal illness, so offspring are not likely. He also has an infatuation with Maria, but she doesn't reciprocate and then leaves.
Alex is back to Ingrid. They have a history that Alex seems to keep trying to avoid/ignore. She is biologically the best mate since they have already successfully reproduced, hence their son Per. It became obvious to me that evolutionary biology was trying to tell Alex to get his act together and go back to Ingrid and take care of his offspring.
My sister is looking forward to getting my book so she can figure out for herself whats going on in this book.