Do or Die by Barbara Fradkin 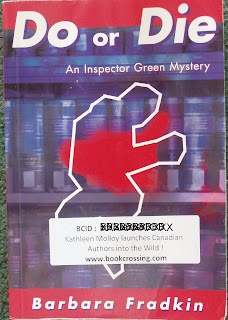 A first novel by Barbara Fradkin, set in the vicinity of the University of Ottawa, Ontario.
-
Inspector Michael Green is called in to investigate the murder of Jonathan Blair, a grad student. With no apparent witnesses Green has to work from the vague recollections of student/librarian Carrie MacDonald. He also has to contend with the victim's mother, Marianne Blair, head of a major funding organization that benefits some of the University's research.
-
Love/Professional Jealousy/Honour Killing/Random???
-
From the first meeting of Inspector Green I felt comfortable with him, as though I'd known of him for years and that he would solve this case in his own way. I knew that he wouldn't suck up to the brass and hurry his investigation just to please them. What we learned about his home life and his relationship with his wife re-enforced my comfort with him. He's a real life guy who has to deal with stuff just like I do.
-
At the mid point of the story I thought that Green was going to make an arrest of the seemingly obvious suspect, but add a few more twists and some conflicting evidence and I was back at square one. I honestly did not know "Who Done it" till the final pages. I had had a faint glimmer of suspicion when I met the character, but the person's demeanor and responses threw me off the trail.
-
I really enjoyed this book. I felt comfortable with Inspector Green and look forward to reading more about him and his future cases. In fact I already have "Once Upon a Time" signed out from my local library.
-
Thanks to Kathleen Molloy for introducing me to Canadian author Barbara Fradkin.
Posted by Heather at 12:12

Thank you for a good review.
I think I´d better add her to my list :)