Once upon a Time by Barbara Fradkin 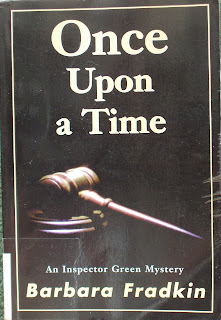 Inspector Green is back. He really doesn't like paperwork and will do almost anything to avoid it, so when he hears of the death of an 80 year old man his suspicion is aroused.
-
While the Coroner says there is nothing suspect in the death, Green noses around and gets enmeshed in a web of hidden secrets spanning back to World War II, Hitler's agenda, the Jewish Ghettos in Poland and men who don't want to acknowledge their past.
-
Makes for an intriguing tale that leads to places and events I could never have suspected.
-
We also learn a lot more about Green himself as well as his relationship with his father, a concentration camp survivor. Without giving anything away, I do love the choice of gift for Tony's first birthday from Green.
-
Not being a student of history, I did have a bit of a hard time following all the events during the war, but that should not deter anyone from reading this wonderfully written tale.
-
Be sure to read "Do or Die" where the character of Inspector Green is introduced and my earlier review.
Posted by Heather at 12:22