Mating Rituals of the North American WASP by Lauren Lipton 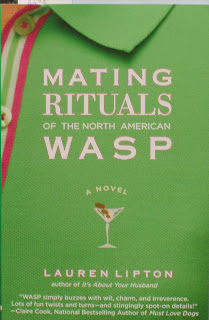 This was a terrific choice to kick off my summer reading. It sure puts an end to the slogan "What happens in Vegas, stays in Vegas".
-
On her last day in Vegas, Peggy Adams wakes up fully clothed laying next to a stranger. Who is he and what did they do? It isn't until days later, back home in New York, that she receives a call from Luke Sedgwick informing her that they had a Vegas wedding. They agree to an annulment until Luke's Great Aunt Abigail makes them an offer they find hard to refuse.
Even though she is in her 90's, I think that Aunt Abby suspected what had happened and figured it was as good a way to get married as any and made the offer to try and get them to fall in love.
-
I enjoyed the character of Peggy. She's educated, intelligent but also unsure about her relationship with her boyfriend Brock. I didn't like him. The only thing that bugged me about Peggy was her difficulty in dealing with anxiety. Fortunately, out of necessity she did learn how to cope when she really needed to.
-
I found myself wanting to know more about Luke. He's a quiet, understated guy, exactly as advertised, though a poet at heart. Turns out he is the Connecticut Yankee he was raised to be. One doesn't go around with their emotions on their sleeve nor do they air their private life to their neighbours.
-
I enjoyed following along with Peggy's relationships and trying to guess how they would end. I kept suspecting that it would be revealed that Brock was having an affair, until I realized that if that relationship were to end, it would have to be Peggy's doing. It was fun to meet Bex and Josh and I found their living relationship a bit odd but workable. They'd make interesting characters in their own novel.
-
If you are looking for some light but not frivolous reading, be sure to read "Mating Rituals of the North American WASP" by Lauren Lipton.
-
Be sure to read the review by Jonita over at 'The Book Chick' where I learned about this book.
Marie at Daisy's Book Journal has further comments on this book.
Posted by Heather at 18:04

I believe this book is on it's way to me...at least it should be. Anyway, it sounds like a nice light and fun summer read. Good review!

I just wanted to let you know that I put a link on my review of this book pointing to your review.

I should really remember to do this more often.