Step by Step: A Pedestrian Memoir by Lawrence Block 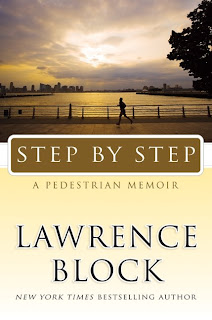 When I first read the blurb on the flyleaf I thought this would be an okay book. A writer who is also a race walker, not bad, but as a runner I didn't know how well it would keep my attention.
-
As it turns out, I didn't need to worry. I was captivated. I lived and breathed every step of the way with Lawrence Block. Each of his training walk had me reflecting on my training routines and routes. I ached over his injured foot and considered the symptoms and his recovery. This is an everyday kinda guy. He's not some super athlete reflecting back on his past triumphs and just wanting to bask in our adulation. He's opened his closet and shown us that he has his own pitfalls, races he didn't finish, mis-calculations on nutritional needs, over confidences and under confidences. He's also shown that his race walking didn't happen in a vacuum, he still had to work/write and produce income so he could attend these events. Most of all, he still had to be a person and a husband. It's not just about the next race.
-
I loved reading about 'El Camino de Santiago', the 3 month pilgrimage across the north of Spain. Yes, it was a major physical challenge, but it was also a relationship challenge and a mental feat many of us might fear. Would the promise of a viewing the next days sunrise or that evenings sunset be enough to keep me going?
-
In my opinion, the ending of the book was perfect. This story was never about the number of medals or final placement, rather about Mr. Block walking for the sake of the walk. He enjoys walking. He's not the fastest, not the slowest, doesn't have the perfect technique, but he's got the drive to want or need to walk. That works for me. I'm not sure when I'll enter my next race, but when I do I will have Mr. Block walking along beside me(he walks faster than I run), at least mentally and we'll complete it together and have fun along the way.
-
If you want to get started reading this book right away, click on the 'Browse Inside' "Step by Step by Lawrence Block" icon to the left.
-
You might enjoy this review by John Kenyon
-
Thanks to HarperCollins for the photo.
Posted by Heather at 12:17