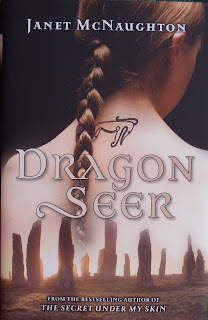 14 year old Madoca has travelled with her Master's family to the yearly Gathering on West Mainland Island in the Scottish Orkneys. Tonight the dragons will chose a new Dragon Seer. Madoca hopes it is Annoc, her Master's daughter, but in a twist of fate, she is chosen. Her life changes from that day and in a few short months it becomes clear that the very fate of the Dragons and that of her people is held in her capable hands.
.
I was captured into this story from the first pages. I could imagine the flight of the Dragons and the hush that must have fallen over the crowd when the choosing of the new Dragon Seer was happening. Even now, I can imagine the mist lifting from between the standing stones as the morning sun began to burn through. I didn't develop a detailed picture of the dragons, but more of an impression of what it would feel like to be in their presence and to be communicating with them.
.
I enjoyed the contrasts of the two older Dragon Seers. Eenna had a motherly comfort and wisdom which made Madoca feel at home from the first day. Nechtan, being a man had the physical presence that made the various leaders want to look to him for advice. Turns out that the differences of the three Dragon Seers became an asset for them in dealing with the demands of their future.
.
The Dragons were at a critical point. There were no longer enough genetic diversity for them to perpetuate their species. They knew this as did the Dragon Seers. Madoca's solution was drastic, but necessary. She was 15 by this point in the story but had matured enough to realize that she didn't have any other choice. Another character who had to grow was Annoc. We don't hear about her for the better part of a year, but when we met her again she has changed and in many good ways. So even the most spoiled of brats can learn and grow.
.
While this is a teen novel, there is enough development of the main characters to keep an adult enthused and reading. With magic and Dragons, this book is sure to be a hit with the young teen crowd.
.
Visit Janet McNaughton's website
1st selection for the 3rd Canadian Book Challenge
Posted by Heather at 10:12