The Gargoyle by Andrew Davidson 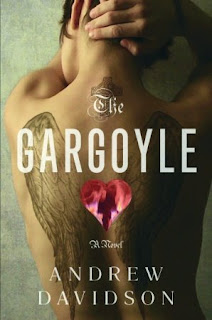 I listened to this book on audio over the course of 3 weeks while driving my children on various outings. I am working for memories as I couldn't very well make notes while driving.
At the onset of the story, our narrator is horrifically injured and burnt in an automobile accident. He was drunk and high and thought he was doing a superb job of his driving. He wakes in the hospital approximately 2 months later.
This introduction to the story left me feeling blank. I had empathy for the narrator, yes they are truly awful injuries, but no sympathy as it was through his own mis-adventure that he was injured. I was hoping that the plot would pick up other wise I was going to erase the file and find something better to read.
Then we met the mysterious and un-predictable Marianne Engle. I loved her from the first moment. Sitting in a hospital bed for hours and days on end, I would want almost anyone to walk in. Right from that first visit I knew that Marianne would be different and enjoyable. I loved the various stories that she told the narrator (we never do learn his name???). While she told stories of different people with different names, I got the feeling that we were really hearing the same story being retold generation after generation. I felt that these were the lives that Marianne had travelled through and touched as she was trying to right some 'karmic' wrong.
I could picture her lost in her work of carving while the narrator wandered the rooms of her house up above. I for one could not tell when she crossed from her artistic passion into her manic mode. Perhaps it would be when she could not be roused from her work even for food or for caring for her precious dog.
Would a person such as Marianne really be able to affect such profound changes of outlook and perspective in such a person as the narrator? He had lead such a debauched life prior to his accident that it was doubtful that he could reform. It was those stories. At first he only listened to them to humour Marianne, after all he couldn't protect himself should she become violent. Then he started to look forward to them and finally he asked to be told more. Myself, I wanted the rest of the current time story to go away and just tell me the 'stories', I needed to know what happened in the past. By telling these stories Marianne was able to help heal her demons as well as those of the narrator.
I was hooked on this book from the point where Marianne entered and didn't want to turn it off. I am glad I stuck with it and will gladly suggest it to my fellow readers.
PS. I loved the way the narrator kept referring to Marianne by her full name. I found that endearing.
.
This is my 2nd book for the 3rd Canadian Book Challenge.
,
Thanks to Random House for the cover picture.
.
Chris's review at Book-a-Rama
Teddy's review at So Many Precious Books, So Little Time
mrbaggins1 review at Dreams, Schemes & Themes
Posted by Heather at 15:05

Thanks for the follow and for stopping by H.! We apparently share a love for more than just running - I knit and read too :o) I like your book reviews, they've helped shape my summer reading list.