Map Addict: A Tale of Obsession, Fudge & the Ordnance Survey by Mike Parker 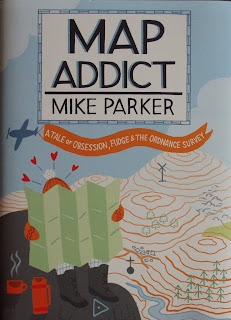 This book had me excited as soon as I laid eyes on the cover. Orange contour lines sketched on the surface of the hills, topographic symbols appropriately scattered, just a promise of what the book held inside.

Having studied mapping at university and having worked at several mapping positions I felt I was fated to read this book. I don't sit with a dictionary at my side when reading, rather I have my favourite atlas at hand, and a larger scale one nearby should that level of detail be needed.

It was quickly obvious that the author knows and loves maps. His early experiences with the British Ordnance Surveys maps and the Paris "Little Red Book: only whet his appetite for further explorations. I loved his story of when he is 12 and of finding a unique feature on a map and pestering his uncle to take him to see the location in real life. It's the Stott Hall Farm where the M62 veers around both sides of the farm.

Mr. Parker shares quite a bit of British map history including that of John Bartholomew who was the first to add shading to represent elevation or depth, Henry Beck for his map of the London Underground (which was simplified to provide only the required details) as well as Alfred Wainwright who is re known for his maps of the Lake District. The greatest amount of attention is given to the Ordnance Survey maps. While they were originally made for the military, they appear to have become the favourite for anyone wanting to find their way around Britain. I wish that Mr. Parker had included part of one of these maps within the book as I have never seen one and being on the other side of the ocean, its not likely I'll come across one, so much of what he was referring to I'll have to take on faith. You can visit the Ordnance Survey website for further details.

I enjoyed the discussion of how maps have been used through history as political tools. since they are but a representation of reality, they can be modified to show what ever is needed or to hide what you don't want to show, such as military installations, safe harbours etc. The influence of Religion on mapping has been apparent with Jerusalem appearing at the centre of some of the earliest maps.

I didn't really understand the section that talked about women and maps. Who is it that thinks women don't understand maps? The majority of the students in my university level mapping courses were women, they sure knew what they were talking about. I worked with lots of women in my mapping jobs, several of which were my bosses.

One of the final topics covered is the future of mapping. Will paper maps survive the onslaught of the GPS unit. As Mr. Parker points out, satellite navigation does have its limits, but as I have found out, you can go to a distant country, pull your GPS out of your luggage, turn it on and away you go. My family travelled around New Zealand for 10 days using our GPS and a small paper map (and driving on the wrong side of the road) and rarely had to make any directional corrections.

I knew from the start that I was going to enjoy this book and I was not mistaken. It was a fun but also informative read. There was new information for me as well as interesting stories. I'll be putting this book on the shelf beside my favourite atlases.

If you can't wait to get started to reading you can find "Map Addict" at the 'Browse Inside' feature on the HarperCollins website.
Posted by Heather at 19:48

Great review! I like maps, too. However, I've never formally studied them. That would be really cool. As long as I can remember, I've been the navigator on road trips. We don't have a GPS (yet), but I don't think anything will replace my paper maps.