It was a hot one today. The temperature was around 25C with a humidity of 85%, meaning it felt like it was 33C. Now imagine running 30k of hills. I could feel the sweat running down my back even when I was standing still.
As I said yesterday, today's theme was 'Middle Eastern Eatery'. This is one of my favourites. I love the choice of spices, mainly coriander and cumin, but I also like chick peas. 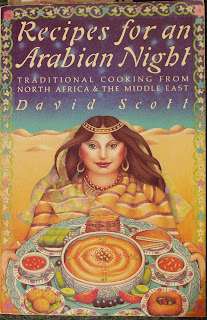 My two main recipes were chosen from 'Recipes for an Arabian Night' by David Scott. I have had this cookbook for ages, at least 15 years. I have made the 'Hummus Bi Tahini' numerous times and today was no exception. Good source of carbs and I imagine that the sesame oil in the tahini is a good type of fat.
For the first time I tried the 'Lebanese Potato Salad'. Along with the parsley, it has chopped mint. Very nice addition. It also has and oil and lemon juice sauce instead of the usual mayonnaise.
I wanted to make the Egyptian 'Basbousa' (Semolina Cake), but I didn't find semolina while shopping. After baking the cake you pour a sugar syrup over the warm cake, saturating it. You then let it cool and serve. I will definitely be looking to find some semolina. 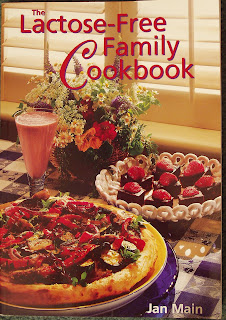 For the dessert I turned to 'The Lactose-Free Family Cookbook'. This was my first recipe from this book, and if they all turn out this well I will certainly be making more. I made 'Fudge Cake. I had a bit of a problem in that I dropped the finished cake while removing it from the pan, but I put the puzzle pieces back together in the right sort of shape and we were able to enjoy it. I also made the recommended 'Cappuccino Sauce' to accompany it. This was a real hit with several of the lactose intolerant runners. One runner even admitted that the thought of the cake kept her running for the second half of the race. Oh the power of the promise of a chocolate treat.
Tomorrow is a 15k hill, evening race so I will share my recipe choices earlier in the day. The theme is 'BBQ'.
Posted by Heather at 21:14

I loved that potato salad! and the chocolate cake! ...pretty much all the food.
Glad I found your blog. I haven't been paying much attention and didn't clue into the themes we've been having.
Looking forward to tonight's food ;-)

ps. I wondered why the cake looked a little 'put together' - still good tho!!

Hi Heather! I ran some legs of the ENDURrun last year and was so sorry not to make it back! I love the idea of theme food days! I am getting hungry reading about it! Love that you are letting us know where the recipes are coming from!
Thank you for your blog and the fantastic job of volunteering! I am enjoying following along virtually this year and hope to be back there next year!
Dawn Lowe

Hi Heather. Great to see this!! Nice job and see you and the kids on Friday and Sunday.

i"m glad that you are enjoying reading about the food. its a really big part of the race as no runner could possibly do this day after day if they weren't getting the right combinations of food. We enjoy spending the time planning the menu and meeting the challenges of the varied diets. Glad you are enjoying it. I look forward to seeing Andy and Dawn at future races.