Slash by Slash with Anthony Bozza 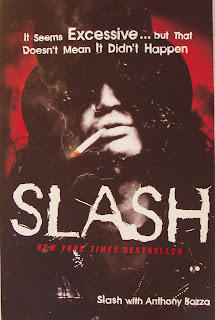 "The guitar is my conscience...whenever I've lost my way, it's brought me back to center; whenever I forget, it reminds me why I'm here."
-
I really enjoyed this book. It gave me a peek into a life that has been lived extremely differently from mine.
-
I'm not going to go into detail about Slash's life, if you're a fan you probably know far more than me, and if you don't know much about him, you'd enjoy it a lot more if you read the book. It's very readable and in language that you'd expect to hear if it were Slash himself sitting across the table from you. He does skip around a bit, but that is a matter of keeping to a story line rather than maintaining a strict time line. He mentions a lot of musicians that he's worked with, but as a matter of record and not in the least name dropping. His acknowledging his drug use and drinking is again fact and not boastful or moralizing. I found myself agreeing with him when he said that he couldn't be forced to make rehab work, it had to be his idea and timing. I was glad for him when he did get clean and realized that he could be just as creative and successful without all drugs.
-
"Drugs stood between where we'd been and where we had to go;"
-
Before reading this book, if you had asked me who Slash was, I would have said a musician. I wouldn't have been able to name any of the songs from his albums. Yet when he started talking about specific songs, particularly 'Paradise City' the tune and words popped into my head. My kids were quite surprised that someone my age would recognize any of this music. They forget that Guns n Roses was getting big while I was finishing University and their music was everywhere.
-
I heartily recommend reading this book. It would make a fantastic gift along with an early Guns n Roses album (such as Appetite for Destruction or Use Your Illusion I or II), a Slash's Snakepit album(such as It's Five O'Clock Somewhere) and finally a Velvet Revolver album (such as Liberatad).
Posted by Heather at 16:29

Heather, thanks for linking this up with Your Favourite Biographies - I don't know much at all about Slash - will need to look into it! Cheers