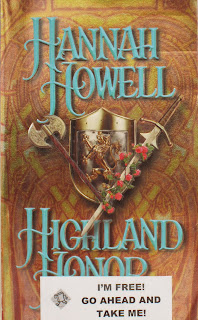 I had picked this one up at a library discard sale hoping that since it featured a Scottish warrior, he'd be wearing a kilt. ah, the disappointment, but that only extended to his lack of kilt.
.
Nigel Murray is a Scot who is serving as a mercenary in 15Th century France when he comes across Gisele, who is trying unsuccessfully to disguise herself as a page. She is in desperate need of rescue as she has been accused of murdering and mutilating her despot of a husband.
.
This story moves along quickly, not only in the territory they cover as they flee France, but in the progression of their relationship. Perhaps with a brave knight at my side I would recover from anything rather quickly?
.
This was a fun, quick read though I did miss it not having a kilt anywhere. ( I love the image of a man in a kilt). This book is labeled for Bookcrossing and will be released into the hands of one of my friends who also enjoys romances.
.
After a comment from Dorte, I did a bit of digging and turns out that the 'kilt' was not invented till about 1745 thought they were wearing the plaid long before that. You can read this article 'Of Kilts and Bagpipes'.
Posted by Heather at 12:19

Did they even wear kilts then?

With or without a kilt, this one sounds good, though :D

I had wondered about that and some research has proved you correct. Thanks for the help.

What no kilt? Sounds like an interesting read even so.

Oh you are lucky to have a library that gives away books! The Toledo Public Library will sometimes have free magazines but always sells discards, course their prices are reasonable but still - I'm jealous : D

I think that I paid 25Cents for this. I find their rates very reasonable.

I have a weakness for Scotsmen. It is a fact. That article on the kilt was fascinating. I love learning something knew and that was my fact of the day! =)