Into the Beautiful North by Luis Alberto Urrea 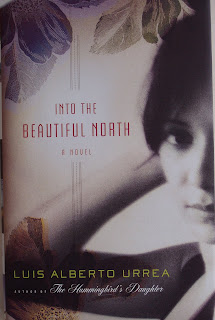 The setting for this novel is the remote Mexican village of Tres Camarones where the adult male population has been dwindling for the past several decades. Nineteen year old Nayeli has noticed that there are very few men in town and no babies. She is not the only one to notice, drug sellers have realized that there is no one left to defend the town and they intend to take it over and run their drugs un-opposed.
.
While watching the classic movie The Magnificent Seven at the local theatre, Nayeli gets the idea to travel to the United States to recruit some Mexican men to return with her to live in and protect her village.
.
With the help of Tacho, her boss, Yoloxochitl (Yolo) and Veronica (Vampi) her best girl friends they set off with the villagers' blessings.
.
I was fascinated by this story. I couldn't believe the hassles and risks that the four took as they travelled across their own country. It is almost impossible to imagine that you would not be safe on a cross country bus trip on well travelled roadways. Unfortunately their troubles do not end there. Their crossing of the border could fill a whole book on its own.
.
I enjoyed pondering three main themes found in this story.
.
We each must take care of our responsibilities, whether it be our spouse, our children or our communities.
.
Women can be strong both physically and mentally. Nayeli and her Aunt Irma and excellent examples as their strengths come in different ways and at varying points in their lives.
.
This story includes a cast who are not afraid to be themselves even though there are many who would prefer they conform. Nayeli studied martial arts when most young girls wanted to learn formal dance steps. Tacho does not deny that he is gay and manages to turn it into a strength and not a weakness for anyone to exploit.
.
I have never met a Samurai, but if I ever should, Atomiko will spring to mind. I loved his character and can imagine him showing up in a Manga comic in the future.
Of course you can read this book without considering these messages and still have an amazing read. The story moves quickly and covers a lot of ground, though at no time did a feel lost, I felt as though I could have been the fifth member of the group.
.
Visit Luis Alberto Urrea's website to learn of his other publications.
Read my review of The Hummingbird's Daughter also by Luis Alberto Urrea.
Read Marie's review at 'Daisy's Book Journel'
Posted by Heather at 15:10

Awesome review! Thanks for sharing your thoughts. I've added a link to my review directing readers to your review here. ;)

This isn't the usual kind of book I'd normally read, but it sounds really good! Thanks for this review - I've added the book to my list.

wow this book looks great! I actually preferred The Seven Samurai instead of The Magnificent Seven. I'm going to give this book a try.

Thanks for the review and the info!