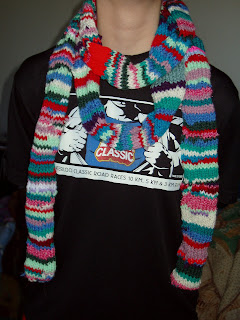 It's been a while since I have written a proper Needlework Tuesday blog entry. Summer has kept me busy and not always doing what I want to be doing. The past two weeks I was back and forth to my neighbour's many times. She is expanding her restaurant to include a banquet room and needed lots of new linens. She is a practical women so figured it was better to make them herself.

I helped her and her mom cut table clothes (80 ish) and napkins (250 ???) and showed them how to do a rolled edge on the serger, which neither of them had ever used previously. What and adventure. They feed me Greek Coffees with tons of caffine until I couldn't re-thread the machine for them. Even though it was difficult, we still had a good time and she knows that I'll help her out any time.

I did manage to fit in a bit of knitting. A few weeks back I said that I was going to knit a 'Harry Potter' type scarf for daughter on her little circular knitting machine. Thought I had better try it out on some scrap yarn first. That's her in the first picture wearing the result. Yes, rather colourful, but she loves it. I did have some problems with the yarns catching on the needles and its rather skinny. Will do the 'Slitherin' scarf on regular needles.
. 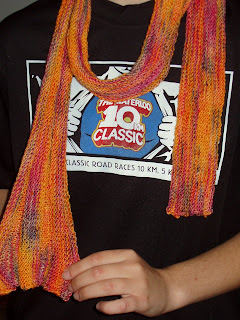 After that was finished I started on my new scarf. I used 2 skeins of Koigu KPPPM fingering weight Merino. I absolutely love the feel of this wool. Will have to find another project to use more of it. I had bought this wool to make another scarf, but there was something wrong with the pattern. Wrote the pattern designer, but never heard back from them. I ripped it out and tried another pattern that my sister gave me. Didn't like all the yarn overs and knitting 3 stitches together, so ripped that out. I picked up a 4.5 mm long round needle, cast on 320 stitches and proceeded in stocking knit stitch for 10 rows. Then I switched to reverse stocking knit stitch (is that the correct term, now the bumps are on the front side) for another 10 rows and then kept switching every 10 rows. I am thrilled with how it turned out. Its going to look great with my brown shearling jacket.

I have yarn/wool bought for 3 more scarves, so you'll be seeing more knitting in the next while.
Posted by Heather at 11:59

ah, knitting. i am trying to knit a baby hat as my first project. wish me luck.