We Need to Talk about Kevin by Lional Shriver 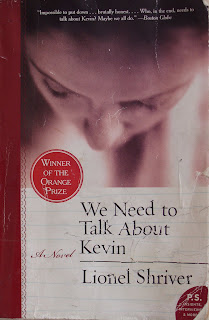 When Deanna at the HarperCollins Facebook group suggested during July that we read this book free online at their Browse Inside feature, my first response was to give it a pass. I didn't really want to read about a kid killing his school mates. Out of respect for Deanna I decided at least I would go and read the cover blurb about the book.
-

That's when I found out that the book wasn't about Kevin, rather it was about his mother and her thoughts surrounding her son and how she raised him and ultimately whether as his mother she was somewhat responsible for his actions.
-

After the first few pages I was hooked. Yes, it is a tough subject matter, but it is part of our reality so I read on. I found that every so often I could identify with Eva. I suspect that many parents could if they are honest with themselves.
-

I appreciated the way Ms. Shriver doled out the details of 'Thursday' bit by bit. Too much at once could have overwhelmed me. As it was I could digest the bits and was prepared when the next letter revealed more. The book is presented as a series of letters to Kevin's father.
-

The last chapter was my undoing. The gift that Kevin gave to his mother on the two year anniversary of the murders had me crying. Up to this point I was convinced that Kevin was a psychopath with no chance of redemption and then he puts that box on the table. He does have feelings for what his did. I am convinced that he had been carefully listening to his mother all his life but that he had fought against her at every turn, now he was ready to end that fight and really listen.
-

A very good read, though I won't recommend it for very sensitive readers or for someone who is feeling depressed.
-
Browse Inside 'We Need to Talk about Kevin'
-

Thanks Deanna for suggesting this book.
Posted by Heather at 13:01

I have heard a lot about this book, but I am not sure I want to read it. Paradoxically, much of the crime fiction I read does not leave a strong impression, but when it comes to real life I am scared off easily.

this is a fictional account but it does note the real situations that happened around the supposed time of this book.

Awesome review Heather! I especially liked your explanation of Kevin and the box. Well done.

Thanks for this review, Heather. Having read the book, I felt pretty much the same as you. It was a real emotional roller-coaster of a read.

Despite the sensitive subject matter, I really want to read this book. Thanks for your review!