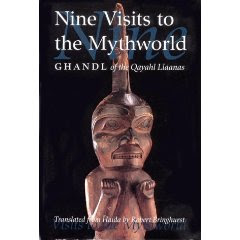 Ghandl 1851-1920
Was a member of the Haida, of a village known as Qayahl Llaanas (The Sea Lion People). The Haida live in the area of the Queen Charlotte Islands in British Columbia. Ghandl was blinded as a young man and thus was no longer able to hunt. Fortunate for us, he became know for his story telling. I have read translations of two of his stories, 'In his Father's Village, Someone Was Just About to go Out Hunting Birds' and 'The Sea Lion Hunter'.


A selection from 'In his Father's Village' where the hunter finds a woman to become his wife:

There were two women bathing in a lake.
Something lay there on the shore.
Two goose skins were thrown over it.
Under their tails were patches of white.

After watching for a while,
he swooped in.
He sat on the two skins.
The women asked to have them back.

He asked the better-looking one to marry him.
The other one replied.
'Don't marry my younger sister.
I am smarter. Marry me.'

'No, I will marry your younger sister,'

And she said that she accepted him, they say.

'Well then! Marry my younger sister.
You caught us bathing in a lake
that belongs to our father.
Now give me my skin.'

He gave it back.
She slipped it on while she was swimming in the lake.

A goose swam in the lake then,
and then she started calling.
And then she flew, they say,
though leaving her younger sister
sickened her heart.

A brief biography by Robert Bringhurst of Ghandl and translated text of "The Sea Lion Hunter"
.
For further information on the Haida, visit the Council of the Haida Nation website

Map of the Queen Charlotte Islands

A selective Bibliography of the Haida is available at the Canadian Museum of Civilization Library.
.

Thanks to Amazon for the cover photo of 'Nine Visits to the Mythworld'.
Posted by Heather at 14:21

Another great post in this series. I especially loved the story of the hunter finding a wife.

I wish I could have put the full stories but I don't want to have copyright issues. Do check the link for 'the Sea Lion Hunter' and read that story.