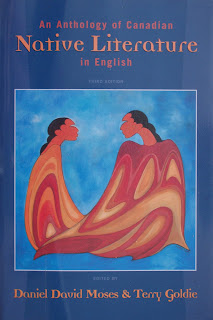 Joseph Brant (Thayendanegea) 1742 - 1807
.
There are two entries in this book by Joseph Brant, the first a letter to an un-identified gentleman and the second a letter of condolence. Both are written in a very thoughtful and eloquent manner. They invite, practically implore you to continue reading. Even though I have only read these two passages, it is easy to understand why Mr. Brant was such a good choice of statesman for the people of the Six Nations Confederacy. He played a major roll in the granting of lands to those loyal to the British when they located to where is now known as Brantford, Ontario.
.
Joseph Brant is also known for his translation of the 'Book of Common Prayer' and selections of 'the Bible' , including the Gospel of St. Mark into the Mohawk Language.
.
Unfortunately I was unable to determine if there is a collection of letters written by Joseph Brant.
.
Further Information about Joseph Brant:
Indigenouspeople.net
UpperCanadaHistory.ca
The Joseph Brant Monument
The Haldimand Proclamation of 1784
The Canadian Museum of Civilization
Posted by Heather at 09:59

How interesting! I'm from Brantford (I don't live there now, but my parents and husbands parents still do) and Joseph Brant is such an interesting historical figure.

I live about 45 minutes from Brantford. OUr house is a short distance from a branch of the Grand River which is still disputed territory in the Haldimand Tract.

What an interesting post - I can tell I'm going to enjoy this new series of yours.