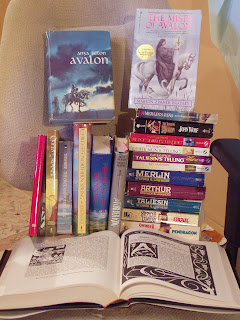 When my kids were little I went through a phase where almost every book I read was based on Arthurian Legend. I couldn't get enough of King Arthur, Gwen and Merlin. Oh to have met Lancelot... I've included 2 pictures of some of my Legend books. After taking the pics I realized there are yet a few more scattered on book shelves around the house. I admit that I haven't read all of them and that some I have read more than once, but I wouldn't consider parting with any of them. I did give away one book to a researcher who had lost all her books to a fire and she needed an out of print one that I happened to have a copy of, but no more will be leaving.

A few weeks ago I was asked by Penguin Books if I would like to review 'Gwenhwyfar: The White Spirit' by Mercedes Lackey. I was jumping out of my chair and saying 'yes, yes, yes, bring it on'. 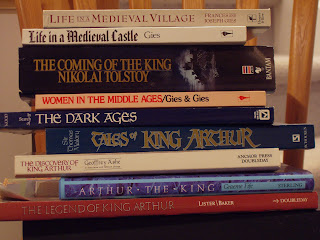 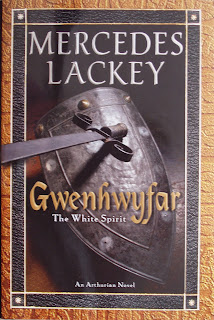 OK, so I did hug this book a few times since it's arrival and have stroked the cover, but I'm not being obsessive or anything. I just happen to like this genre, a lot.

This is a most different version of Gwen. Ms. Lackey posits that there are actually three Queens married to Arthur (at different times) who are all named Gwenhwyfar. Each is very different from the other and all have varying reasons for marrying him. The author presented this in such a way that it was quite believable. Co-incidence or magic, I have no way of knowing though names go through periods of popularity, so why not.

There was just enough 'magic' to imbue the book with its other worldly feeling. A field of mist, a slight shift of the eye and I could imagine Gwyn ap Nudd, King of the Folk of Annwn appearing at my shoulder and whispering mystic secrets for mine and Gwen's ears alone.

This was a wonderful telling of the story of Gwenhwyfar from her own perspective. A warrior Queen suitable for the High King of Britain. She decided early in her life that she wanted to be a warrior and she sought the training and strove to succeed even though others wanted her to follow another path. Not only did she succeed but she had me cheering for her.

By the end of the book, with tears pouring down my cheeks, I was still rooting for her to make another choice that would be her own and not what others wanted her to do.

I will be keeping this book in the safe company of the other pictured books. Perhaps my daughter will develop a passion for King Arthur and his Companions. If you like stories based on Arthurian Legend, I have no doubt you'll love this version.
Posted by Heather at 11:28

I took a class in Arthurian Legend and I loved reading the original tales, but my favorite Arthurian story is still The Mists of Avalon.

I would have a hard time picking my favourite, probably would be the one I read most recently, but I do recall loving the 'Mists of Avalon' and being so sad when it ended.

I love Arthur tales too and would love to read this one on Gwen and her perspective. Fabulous review:) I'm presently reading Pendragon's Banner by Helen Hollick and it's quite good. I'll probably have my review up by next week. Right now though, I'm having a giveaway- come check it out if you're interested.
Lucy

Not a genre I've read but you sound so enthusiastic perhaps I'll give your recommendation a try. Thanks for that Heather.

Different types of Gwyn...I could buy that in a heart beat. I always picture her as a warrior Queen too. Wouldn't she have to be, to a certain extent. Haven't heard of this book, but I will be on the look out. Thanks!