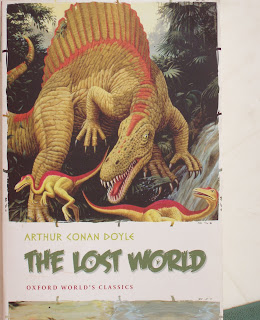 I was thrilled to receive this book in the mail. It was well travelled by the time it hit my mailbox. It started in England, then to Australia, next to South Africa and finally to Ontario Canada. Wow, I am tired thinking about all those miles.
.
It is part of the "Lost World Read 2009" that celebrates the 150th birthday of Arthur Conan Doyle and the 200th birthday of Charles Darwin.
.
This version of the book was specially printed for this program and it has also been registered with Bookcrossing and will continue travelling to other willing readers.
.
I had never read the book previously, but had watched bits and pieces of television shows based on the book. This finally clues me in to why people are stranded on a plateau with animals thought long extinct.
.
I really enjoyed 3 of the main characters: Mr. Malone, the young love struck newspaper man who wants to impress his love, Lord John Roxton, an adventurer, and Professor Challenger, the man who first brought word of the lost plateau and its inhabitants. I didn't really like Professor Summerlee, the naysayer, but he was needed for the plot to develop. Does there need to be a doubting Thomas to push for the discovery of evidence?
.
Throughout their adventures they showed that they could put aside their differences and work together for the common good, which in this case was their survival.
.
A wonderful read and I look forward to sending it along to its next reader.
Posted by Heather at 14:10

I love the idea that books have a history! On occasion, I read something that I feel a friend or family member of mine just "has" to read and I pass it on to them. I tell them to pass their copy on as well, to share the love! Hopefully some of my books have enjoyed interesting journies as well!!