Murder in the Magick Club by Byron A. Lorrier 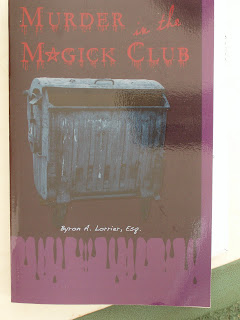 Sorry that the photo I took does no justice to the wonderful cover of this book. In reality it is a slick, glossy black that begs to be touched.
.
I started reading and was working through the first chapters taking it very seriously, and not enjoying the story very much. I went and re-read the promo post card that I received from the author and realized I was in the wrong frame of mind for this book. I wasn't reading a financial report, rather a fun, yet quirky story. I told myself to loosen up and enjoy. From the next chapter forward I started to get into the characters.
.
Bryn has opened a bar called 'the Magick Club' and he employs the oddest assortment of staff. Robert and Cal are his waiters, both petty criminals and definitely not 'above board'. Magdeline(Madge) and Briana(Bri) are waitresses, of which, only Bri seems to have any concept of actually working. Honey is the resident psychic, though she plays only a small roll in the plot.
.
One morning Bryn finds a body behind the dumpster. None of the employees know the dead man or have any idea what happened. The murder, in fact, is not the main story here. Rather its about this bunch of misfits who find themselves thrown or drawn together each day. They are such a bizarre group that I can't understand why Bryn doesn't fire them all, well except for Briana, and why does she put up with them?
.
At first I had some empathy for Madge, but the more she opened her mouth the more disgusted I became with her. She was a walking, talking contradiction. I wanted to thump some sense into her. I started to look forward to what weirdness she could spout next. (I'm sitting here shaking my head...).
.
I could almost like Bryn. His talking in the vernacular at first seemed a bit overdone, but as the chapters fled by, I didn't really notice it anymore and it became natural to him. I don't know what he was doing running a bar. He was an educated man and could have chosen other careers, but for some unknown reason, Robert and Cal hold some sort of sway in getting him to do what they want. This is not really explored, so the reader is left to speculate. Is it the unspoken magic that surrounds the bar, the building, and possibly the whole neighbourhood?
.
This was a interesting book. The murder was a sideline for me, it was all about the people and their thoughts and behaviours. As odd and unbelievable as they may be, I feel that I may have met some of them specially Madge. No one can make up people like this, they must be real. A visit to some trailer trash and petty criminals all without leaving my comfy front room.
.
Read Mama Zen's review
Posted by Heather at 13:26

ty for your review
you're too kind
re "must be real"-- we've all worked for our share of grines (straight out of dickens), had to abide nastinesses, & all had project friends like madge, who part of me can't help but love
all the best-- b

I have never heard about this author before.
But when you say, "I feel that I may have met some of them", I think what a fantastic recommendation of a book. That is the way fictional characters SHOULD be :D