Progress on 'Dear Jane' was limited this week, but I am determined to do at least one block a week. That way it won't get pushed to a back corner and forgotten for months on end. Then I would have my readers sending me inquiries wondering if I ran out of orange fabric or something.

This block is C-3 Rayelle's Fence. At first it looks kind of complicated, but then I realized that its really a 9 patch whose sub-units are 4 patches and fence rails. Didn't have anything small enough to fussy cut for the centre as that piece was only cut 2 inches. The strips were all 1 1/4 inches as were the squares. 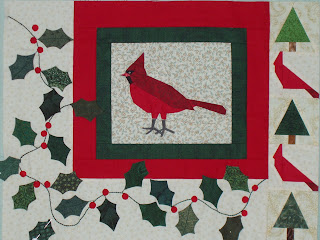 I was so excited to finish this Cardinal block. All the tiny holly berries are stitched on. They measure about 11mm. Quite tiny. There are 18 of them. Three leaves are not stitched down, as they overlap the neighbouring blocks. Will have to work on one of these neighbouring blocks next. Check back next week to see which. 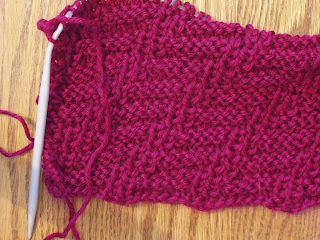 I started on the Bernat Stitch Along yesterday. I have done 1 1/2 repeats of the pattern and its looking good. The colour in this photo isn't good, but it shows the pattern better this way. I ended up knitting on larger 5.5 mm needles rather than the 5mm called for. We are told that we need to knit this square three times, once in each colour. In a few weeks, they will post the next step/block. I think that this pattern would make a wonderful scarf for a man. Of course done in a colour that doesn't look so pink, unless he likes pink.

I was browsing some of my favourite sites yesterday and came across a pic of my mother. She attended a workshop featuring a quilt teacher from Ireland. The special part is that my mother had been trading fabric postcards with the instructor via an online postcard group. I don't have a 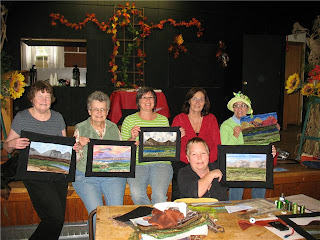 copy of the photo to post yet (for some reason I couldn't capture it from the site), but you can click this link and she is the lady to the left in the very first photo. Landscape Technique Workshop with Miriam at Linda's 'Living, Quilting and Stuff . How special that my mother got to meet one of her 'virtual' friends. 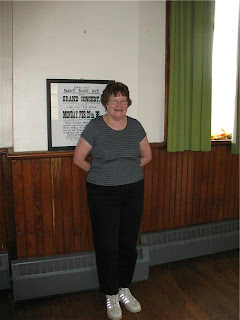 Update on Wednesday, October 28. Linda kindly sent along the file with two pictures which I have now posted.
Posted by Heather at 11:43

Your block is great.

And you're so smart about working on it every week. I picked mine up when we were having company and haven't gotten it back out.

Tidy, but not effective. :)

My baby sweater has been sitting here without any rows added to it for a week or so.

I think I'll join you working on stitchy stuff on Tuesday.

Best regards and I hope you're having a great day.

Wow, I absolutely love the holly design, it's so festive. I know I've said it before but I'll say it again - you are one talented woman Heather.

I love the Cardinal!

The Bernat Stitch along looks like a nice pattern to.

The cardinal is beautiful and makes me think of Winter and Christmas.
Real men can wear pink :)