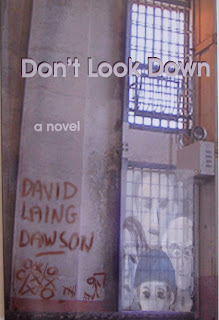 When I received and email asking if I would like a copy of this book to review I noticed that David Laing Dawson is a relatively local author from the Hamilton, Ontario area. I have been trying to read local authors this year and his book did sound good, so I accepted the offer.
.
I'm glad I did. It was an eye-opener look at the complexities of the mentally ill. In the book we are introduced to four men who have been detained for the purpose of determining whether they are mentally fit to stand trial for murder.
.
Henry is 81 and may have killed his second wife who had terminal cancer. Even through his confusion, Henry comes across as a caring man. His youngest room-mate David, 18, is compulsive about maintaining routine and doing things just right. Joseph is mid age and has beaten his wife. Not a happy man in any way. Finally, there is Frank. Everyone is afraid of Frank. He's just plain dangerous.
.
As each man meets with his Doctor, we slowly start to learn about them. In fact, I am amazed that Mr. Dawson could portray each character and their very different ailments in such a slim volume of 174 pages. I even began to feel compassion for Henry and David.
.
This is not some glittery, pyscho thriller, rather it cuts to the core of some serious mental health issues, but doesn't make you feel as though you are reading text book or a case study. I would definitely read more by Mr. Dawson.
.
Click here to learn about David Laing Dawson's previous novels.
.
Painting by David Laing Dawson
Posted by Heather at 15:49

If I was a published author, I'd ask you to review my book, too.

Your reviews are so well written and the books you read are so interesting.