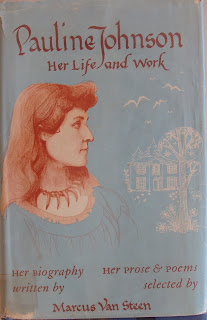 E. Pauline Johnson was born March 10, 1861 on the Six Nations Reserve near Brantford, Ontario. She passed away March 7, 1913 in Vancouver, British Colombia.
.
She was the daughter of Mohawk Chief George Henry Martin Johnson and Emily Susanna Howells.
.
The one things that stands out about Pauline is that she was very proud of her Indian Heritage. It was front and centre in her writing and in her many performances. Possibly it was due to the role her Indian grandfather Smoke Johnson played in her upbringing. He spent much time with her as a young child telling her stories of the Mohawk people and their legends.
.
After the death of her father in 1884, Pauline had to support herself and her mother. Encouraged by friends she started to submit her poetry and writings to various publications. She soon became well known for her dramatic orations.
.
If you would like to learn more about Pauline, see my earlier review of her biography Flint & Feather: The Life and times of E. Pauline Johnson, Tekahionwake, by Charlotte Gray
.
The Pauline Johnson Archive at McMaster University in Hamilton, Ontario contains a large collection of information.
.
The Brantford Public Library also has an online collection of article about Pauline.
Pauline Johnson: Her Life and work by Marcus Van Steen
This is a short introduction to the life of Pauline Johnson. Her biography covers the first 42 pages. Its the next 200 or so that were of most interest to me. This is a selection of her poetry, prose and articles.
I have included below the text of her most famous poem:
.
The Song my Paddle Sings
by E. Pauline Johnson
.
West wind, blow from your prairie nest,
Blow from the mountains, blow from the west.
The sail is idle, the sailor too;
O! wind of the west. we wait for you.
Blow, blow!
I have wooed you so,
But never a favour you bestow.
You rock your cradle the hills between,
But scorn to notice my white lateen.
.
I stow the sail, unship the mast:
I wooed you long but my wooing's past;
My paddle will lull you into rest.
O! drowsy wind of the drowsy west,
Sleep, sleep.
By your mountain steep,
Or down where the prairie grasses sweep!
Now fold in slumber your laggard wings,
For soft is the song my paddle sings.
.
August is laughing across the sky,
Laughing while paddle, canoe and I,
Drift, drift,
Where the hills uplift
On either side of the current swift.
The river rolls in its rocky bed;
My paddle is plying its way ahead!
Dip, dip,
While the waters flip
In foam as over their breast we slip.
.
And oh, the river runs swifter now;
The eddies circle about my bow.
Swirl, Swirl!
How the ripples curl
In many a dangerous pool awhirl!
.
And forward far the rapids roar,
Fretting their margin for evermore.
Dash, dash,
With a mighty crash,
They seethe, and boil, and bound, and splash.
.
Be strong, O paddle! be brave, canoe!
The reckless waves you must plunge into.
Reel, reel.
On your trembling keel,
But never a fear my craft will feel.
We've raced the rapid, we're far ahead!
The river slips through its silent bed.
Sway, sway,
As the bubbles spray
And fall in tinkling tunes away.
.
And up on the hills against the sky,
A fir tree rocking its lullaby,
Swings, swings,
Its emerald wings,
Swelling the song that my paddle sings.
Posted by Heather at 19:50

This sounds really good. Flint and Feathers has been on my TBR for quite some time.