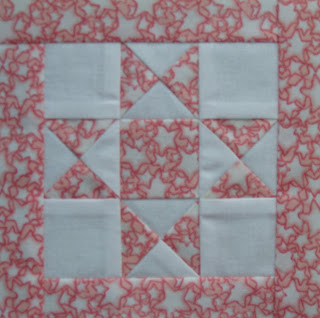 It's been a busy week for me. I am working every day on my novel and am doing more research than I could ever have imagined. Things like: how many Russians lived in Australia in 1914? Stops along the Trans Siberian Railway in 1904? Names of Tsar Nicholas II's children? and Japanese family crests to name just a few.

Yes, I really need to know all these plus I had to start looking up quilt blocks so I could design a virtual quilt to represent the trip on that railway by my characters. I will have to re-install my Electric Quilt and work up that design. I continually amaze myself at how much time I can spend doing odd little things. I should mention that I also spent hours flipping back and forth in my Dear Jane book selecting the perfect blocks to discuss in my novel. Of course my main character has to be a quilter and just like me she is sewing her version of the quilt in orange fabric. This week she pieced the two blocks shown here. Since a number of my characters are immigrating to Australia, I got wondering about the difference blocks Jane Stickle might have pieced had she been been Australian. Read my post titled "Dear Jane and Australia" and leave me a comment.

The first Block shown is H-7 Bennington Star. I got that fabric from my daughter and thought it fit perfectly. I missed on a couple of the star points, but I'm not going to sweat it. I was in need of some blocks with lighter orange fabrics. 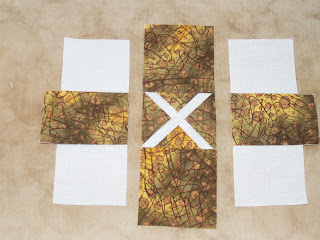 The second block is A-4 Courtney's Stethoscope. I can't imagine why that title. I wanted to use another star fabric, but didn't have the luxury of getting to the quilt shop. I did have a bit of this fabric and to me it sort of looks like outer space with an orange twist. I did not paper piece, rather made it as a 9 patch as shown in the second photo and then cut it one point and added the outer borders. 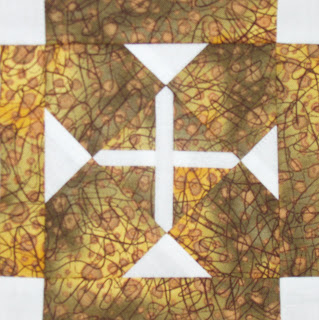 Oops, I did make a slight mistake. The white cross in the middle should have been from the print fabric and the triangles around it should be white. I don't know if I'll redo this one. I rather like it. 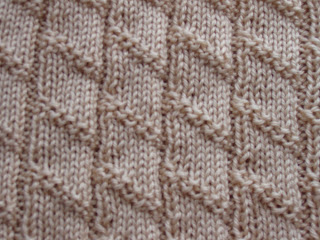 Step 2 of the Bernat knit along is now available. I did up the block for my first colour the other evening. It was very straight forward. The tension was much better than the first block. I am looking forward to the next stitch pattern.

I had better get back to my novel as I am in the middle of describing a traditional Russian dinner circa 1904 and I am getting hungry and thirsty for the tea in the silver samovar.
come back next week and see what I have been stitching.
If you decide to join me and feature your Tuesday needlework, send me the link so I can post it here.
Posted by Heather at 13:38

Your writing project has me intrigued...your blog post brings back memories of when my parents used to fire up the samovar when I was growing up (in New Jersey!).

Sounds like you have a really great novel there - do keep us informed of its progression.

The square you did up for the knit-a-long looks just like the pattern I used to make a shawl for a friend.

this is a nice knit stitch. I rather enjoy doing it. Not too much counting so I can knit while watching tv.

I never bother to re do a block unless it really looks bad because of a color mix up - I would leave the block the way it is :)
Karen
http://karensquilting.com/blog/

i like the way the block look,s but I am curious how it would look pieced as the pattern shows, I will eventually piece the other way and then decide which to use in the quilt,

Hi Heather,
Your doing a great job on your Dear Jane blocks. You are much more patient than I would be. Have a great day!