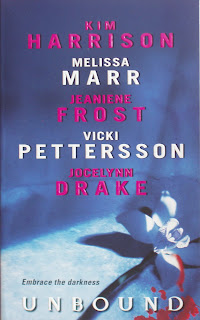 This is a collection of 5 short stories by authors known for their exploration of the mythic worlds. Fairies, vampires and superheros abound.

My favourite of the grouping was 'Ley Line Drifter' by Kim Harrison. It is set in Cincinnati at a time when the remaining human population lives in an uneasy peace with numerous 'other' beings. Jenks is a pixy who has the unusual job of a private investigator.

This was a take on pixy's that I had not experienced previously. in fact, I don't think I had even considered pixys as main characters before. I don't know why as this was a totally convincing portrayal. I loved this character and was sad when the story ended. I still want to read more of his exploits.

The creepiest story in the book is 'Reckoning' by Jeaniene Frost.

Bones is a vampire but also a bounty hunter and he is on the prowl for Delphine and Louis LaLauries who have been dismembering and eating people for two hundred in New Orleans. Bones is also a vampire with a conscience and great looks to boot. Yes, I definitely want more of him.

Dark Matters by Vicki Pettersson is the story of 2 superheros, one on the side of light and the other dark. They meet and the hormones fly. Good vs bad, love vs hate, with a illicit romance tangled within.

This story didn't really work for me, I never was much of a superhero fan.


The Dead, the Damned, and the Forgotten by Jocelynn Drake is the story of Mira, the Keeper of the Domain of Savannah. It's her job to police the behaviour of the 'nightwalkers' living in her territory. All hell erupts one night and Mira has to straighten it out before she is recalled to the 'Coven' to explain. That's one thing she definitely doesn't want to do. I loved the characters of Mira and her assistant/enforcer Knox. They work well together, very well indeed.

The final entry is by Melissa Marr titled 'Two Lines'. This story introduced me to a mythical being called a Glaistig, which is a female who has murdered and had sex within the same month. At issue in this story is Eavan, who has done neither and doesn't want to change, she likes being human. But, she is treading a very thin line and her grandmother Nyx is doing what she can to tip the balance. I was surprised that I didn't enjoy this story very much. I loved her earlier book 'Wicked Lovely', I guess I was expecting more faery stories.

If you enjoy mythic characters and strong moral characters, then you'll love this book. If you don't like vampires, well maybe not for you. As for age appropriateness, I am not letting my 13 year old daughter read this yet. She loves Vampire stories, but there is sex and violence, so she will have to wait.

Thanks to HarperCollins for sending me this book to review.

Books & other Thoughts
Posted by Heather at 13:22