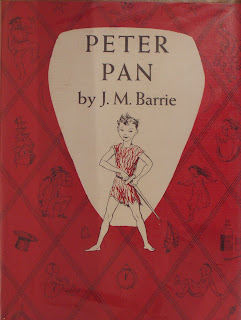 Peter Pan has long ago gone through the 'Disneyfication' process and few people I know have read the original version of this story. I have been trying to find a version that has not been rework and don't know if I have yet succeeded.

I found both the copies shown at my local library. The first is a 1950 version from Charles Scribner's Sons. This is the one that my husband and I both chose to read. He also compared a number of pages between both books and found they were the same.

You could read this book very quickly and lightly and decide that its an enchanting story of a flying boy who is in need of a mother. He finds a girl sitting at her open nursery window and convinces her and her brothers to return to Neverland with him. Oh how sweet.

You could read a little deeper and find that all is not so bright an cheery. Peter can be very ruthless. When the children are first flying to Neverland, its a very long flight and occasionally John, Michael and Wendy would fall asleep and then they would drop toward the ocean. Peter would wait till the very last moment to save them.

Peter seems to like to have others around so he can boast to them, but I question whether he cares about them. This quote from page 68 says 'no'.

"The boys on the island vary, of course, in numbers, according as they get killed and so on; and when they seem to be growing up, which is against the rules, Peter thins them out;"

By saying 'thins them out' I suspect that means 'kills them'. There is more killing. In the final battle, in order to keep secret that he has boarded Hook's ship, Peter kills the quarter master Ed Teynte and then refers to the body as carrion. Teynte hadn't attacked him. Peter doesn't exhibit 'good form' when he sneakily kills Hook by kicking him overboard when he is standing on the bulwark instead of engaging him in a fair sword battle.

There is one passage near the end of the book where Peter has returned to Wendy after she has been home with her family for a year. She is looking forward to talking about old times, including Captain Hook.

" 'Who is Captian Hook?' he asked with interest when she spoke of the arch enemy.

'Don't you remember,' she asked, amazed, 'how you killed him and saved all our lives?'

'I forget them after I kill them,' he replied carelessly. "

Having been raised on Walt Disney versions of this story I didn't know about this blood thirsty side of Peter Pan. Interesting. I will be looking for an even earlier edition of this book to read and check for changes in the text.

One question did come to mind regarding Princess Tiger Lily. I had to wonder whether she was fashioned after Mohawk author/poet Pauline Johnson? She had toured England a number of times before Mr. Barrie penned this book. I wonder if perhaps he had viewed one of her orations where she was garbed in her 'Indian' dress and he was inspired to include her as a character? 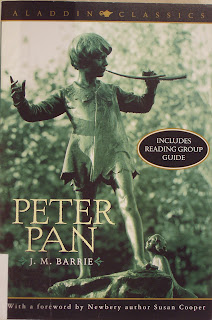 I will be continuing with my quest to read and review other Peter Pan inspired stories.

Other Peter Pan inspired books that I have reviewed:

Peter and the Starcatchers by Dave Barrie and Ridley Pearson
Posted by Heather at 19:14

A thought provoking post, thanks Heather. Like yourself I've read many versions of the Peter Pan story, none of which can compare to the original. Can I ask about your take on PP films, do you like them and, if so, do you have a favourite version.