It was great to take a bit of a break for the holidays. Lots of baking, some frantic knitting to finish up a gift and of course trying to keep the dog from opening presents that had found their way under the tree a few days early. I did a bit of reading and will have a few reviews for you in the next days. 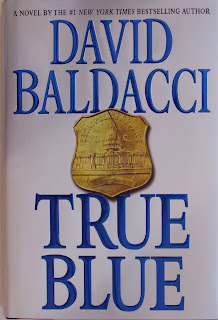 Thanks to Miriam at Grand Central Publishing for sending me this review copy. As far as I can recall, its my first novel by David Baldacci and it won't be my last. Once I had read the first few chapters and met some of the main characters, I wanted to forget the Christmas guests and keep reading. Unfortunately life doesn't work out that way and I had to be kept in suspense a bit longer.
.
Mace Perry has been stewing in jail for two years after being set up by unknown persons. She has spent that time planning on how to clear her name and regain her position on the D.C. Police force, of which her sister Beth is the Chief.
.
On her first day out of jail, Mace is with her sister, when Beth is called out to a murder and Mace decides to tag along. It isn't long before she finds herself drawn into the case and seeking to solve it before the Police.
.
It didn't take me long to realize that Mace is a cop through and through. She wasn't doing it just for the money or the glory, but that she really believed in what the Police do and what they stand for. Just because they took away her badge, they couldn't take the 'cop' out of her.
.
It was interesting to watch how her relationship with attorney Roy Kingman went quickly from antagonist to co-investigator. Without knowing each other, they were able to draw out the strengths of the other and work well together. One of those situations where you meet someone and you know almost immediately that you are supposed to know each other.
.
Now as for that bitch Mona Danforth, Interim US Attorney for D.C., she is one piece of work. She is so slick and self confident that I could only find myself rooting against her. I have to wonder if Mr. Baldacci has come across someone like that and had to develop the person as a character to the fullest. Every time she put in an appearance I read eagerly to see if she would finally get her comeuppance. You will have to read the book to find out.
.
I enjoyed this book, though I do admit that I got a bit lost in the political intrigue with the illegal movement of funds but it didn't diminish my enjoyment one bit.
Posted by Heather at 12:39

A good review, as always.

Wishing you and your family a wonderful new year.

Hi, just wanted to thank you for stopping by R&B: Read and Blog. The only Baldacci I've read was The Christmas Train, but I have several on my TBR list.
Betty