The Frozen Thames by Helen Humphreys 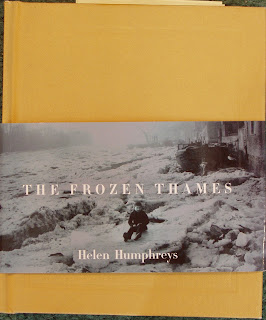 This little book (5 1/2 " wide x 6 1/2 " tall x 1 " thick) is a real gem. Its the story of the the 40 times that the Thames River frozen over upstream from the London Bridge, in England.
.
That the river froze is factual, some of the stories that accompany a given year are also based on fact and others are fanciful. That did not diminish my enjoyment of this book.
.
There were several years that stuck in my mind:
.
1608 Bess of Hardwick
The author tells us that Bess employed workmen to continuously build on her house as a fortune teller had foretold that she would die if the work stopped. Apparently it was so cold in 1608 that the mortar would not set and thus building stopped.
.
1649 The Execution of Charles Stuart - King of England
A significant moment in history worth noting.
.
1740 Russian Ice Palace
Empress Anna ordered an ice palace constructed in Russia. This task was again undertaken in Saint Petersburg in 2006.
.
This is not a 'meat and potatoes' kind of book that you can really set into reading. Rather its like that bowl of tiny after dinner mints; you can read one story and walk away, come back later for a couple of stories and then leave a few in the bowl for the next day.
.
I do wish that there had been included a map of the Thames River with the mentioned locations, including the old and current London Bridge.
Posted by Heather at 13:56

Thanks for the review! This one is on my TBR.

I'm sure enjoying reading your book reviews and will take a list of suggestions to the library. :-)